Elsie Maude Avril was born in Sydney, Australia on 6/10/1889 and first appears in UK censuses in 1901, when her widowed mother Emma Avril was running a small private school in Haywards Heath, Sussex. Elsie (11) had 2 older sisters Marguerite, 19, a governess and Dorothy, 15. By 1911 census her mother Emma had moved to Wyndham Cresc (nr Tufnell Park) in North London. Elsie (21) was a music student (violin).

Maud Karpeles related the story* that she was on holiday with her parents at Cliftonville, near Margate and happened to hear Elsie Avril playing the violin in a small ensemble in the hotel. Maud was struck by the wonderful rhythm of Elsie's playing and invited her to meet Sharp and perhaps play for the newly formed morris dance teams under his supervision. Elsie was thereafter engaged to play at the Stratford Summer Schools and she became a regular accompanist at public performances. Her nickname apparently was 'Ruby'.

Elsie Avril went with the EFDS to USA in 1927 and participated in their tour of Canada in 1929. She later accompanied Imogen Holst (piano) on HMV recordings as well as Joan Sharp, Cecil's daughter (pipe and tabor) on Columbia recordings. 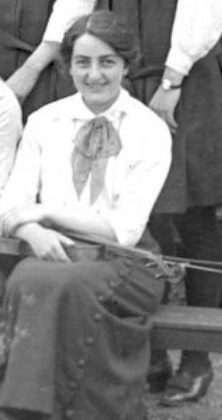