William Bayliss at Buckland, Glos: age 63, 6 songs 7 Apr 1909: Sharp selected 2 carols by Bayliss for inclusion in English Folk-Carols (Novello 1911). These were ‘On Christmas Night all Christians sing’ (p24 FT2131) and ‘Wassail Song’ (p55, FT2132). The former is not the standard tune we sing today – that was collected in 1904 by Vaughan Williams from Mrs Harriet Verrall nr Horsham (aka ‘The Sussex Carol’).

William Baylis was baptised on 31/1/1847 at Winchcombe church, son of Mary Baylis, single woman at Winchcombe workhouse. Mary was only 18 at the time. Although Mary's older sister Jane had already left home to go into domestic service, her father Henry was an agricultural labourer in his late 40s and perhaps felt unable to support his daughter and her new baby. In fact Henry died in 1850 and Mary’s mother Hannah pulled the family back together to survive (1851 census at Stanton). William is listed as ‘grandson aged 4’. Mary then married Samuel Evans on 10/11/1855 at Stanton church and they moved to Buckland.

In the 1861 census Samuel’s name is spelled ‘Avins’. He was an agricultural labourer, aged 28, Mary was aged 32 and son William (Avins, rather than Baylis) was 14, an agricultural labourer too. By then William had a half-sister Elizabeth 7, and two half-brothers James 5 and Henry 2. He reverted to his birth name ‘Baylis’ at his wedding to Matilda Andrews at Buckland on 19/10/1867 and the ‘father’s name’ column was left blank. Neither could sign their name in the register.

William and Matilda had 8 children, 1 of whom died young. In 3 of the next 5 censuses his surname was spelled ‘Bayliss’ and in 2 it was ‘Baylis’. He was always an agricultural labourer. William continued to live at Buckland, just a few doors away from his mother Mary Evans. She did not die till June 1910, aged 82, not long after William met Sharp. William himself was buried at Buckland 19/1/1926 aged 79. 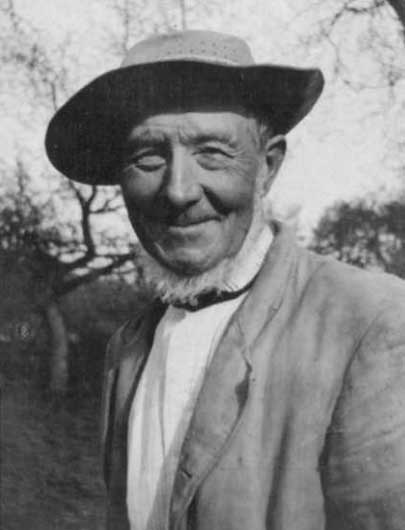