As regards Sam’s musical ability, it is said that he couldn’t read music notation but had a wonderful memory. He once wrote to the local press: ‘I have played more than 100 tunes on the fiddle in an evening and know more than 40 songs, while the country dances I picked up from bands of old fiddlers as they were danced a quarter of a century ago’ (Stratford-upon-Avon Herald 18 Aug 1910).

Sam married Mary Elizabeth Barnett at St Mary’s Ilmington on 17/10/1899 and they had 2 children – Martha and Samuel. They lived at Foxcote Hill in the village. Sam was a soft fruit merchant – everything from plums to blackberries and gooseberries, worked from a very large allotment. He had a van to transport his goods and get about – the nearest train station then was 2 miles away at Longdon Road (closed in 1929). He was very active in community life – when the American collector James Madison Carpenter* recorded Sam’s playing, he took some good photos: https://www.vwml.org/search?q=Bennett%20Carpenter&is=1 Note that Sam also played fiddle occasionally for the Bampton morris as a guest musician.

*For a comparison between the aims and techniques of Sharp and Carpenter, see 'One Musician, Two Collectors, Different Results' by Elaine Bradtke https://www.abdn.ac.uk/elphinstone/documents/Two_Collectors.pdf

Sam Bennett revived the Ilmington dances with a new young side around 1906 - Sharp’s Folk Dance Notes vol1 p80, written in August 1909, attest to this. Although none of Sam’s immediate family seem to have participated in the morris before him, he began learning morris tunes from Tom Arthur (c1802-1890), the old pipe and tabor player. In 1886 Tom’s son James Arthur (1828-1906) had also taught some morris tunes to John Robbins of the Bidford morris men as part of D’Arcy Ferris’ revival project (see separate profiles). This quickly prompted a revival of the Ilmington morris, which had lapsed approximately 20 years previously. Sam was then only 21 and his name does not appear as a dancer in that side but he must have absorbed some of the tradition, even if that revival did last for only 3 or 4 years.

Sam was a natural musician, picking up tunes and songs as he went. He was a born entertainer – for example, in April 1909 he led a social evening at nearby Newbold-on-Stour, performing both a broom dance and a ‘bacca pipes’ dance and playing (with a piano accompanist) for dancing until 3.30am**. Above all Sam was a great enthusiast for folk material, customs and traditions. The young morris side, which Sam had trained, performed publicly at a Garden Fete in Ilmington on 22 August 1907**. They then busked at Stratford-on-Avon on Saturday 9 May 1908 and ‘greatly delighted the visitors and residents’**. The troupe included Henry Bennett (Sam’s younger brother) aged 36; Joseph Aston, 31; Tom & John Newman, 25 & 18; John Cooke, 18; Frank & Robey Rouse, 22 & 20; accompanied by a hobby horse (A.Terry) and a clown (John Terry). Sam Bennett (then aged 42) was described as ‘manager, trainer and fiddler’. The team impressed the organisers of the Shakespeare Festival enough to invite the troupe back to take part in May 1909 in the ‘Old English Games and Sports’ programme, where their dances were ‘exceedingly well executed’**.

Despite these various plaudits, doubts would be raised as to the ‘authenticity’ of Sam’s dances. Sharp himself first met Sam on 12 January 1909, when he noted the song The Keeper (which doubles as an Ilmington dance) as well as 10 morris tunes (FT2052ff). These included ‘Maid of the Mill’ (FT2061 an unusual linked-hanky dance) and ‘Bumpus o’Stretton’ (FT2058 ‘we always came on to ‘Bumpus’'). Sharp next visited Sam on 5 April 1909, when he noted the figures for 5 dances (field notebook words 1909/2 p3ff and FW1995-2004). He saw Sam again at the Ilmington troupe’s appearance at Stratford Festival on 6 May and awarded Sam first prize in the folksong competition for his singing of The Keeper.

However, Sharp was dissatisfied with his efforts and returned to Sam in August to check all previous dance figures and to make definite revisions to ‘Maid of the Mill’ (FW2073). He achieved this by watching the troupe performing at the Flower Show at Stretton-on-the-Fosse on 12 August 1909, when he also took down a new dance ‘Shepherd’s Hey’ (FW2079). Sharp felt obliged to note down 2 more songs from Sam – ‘Thorney Moor Woods’ and ‘Admiral Benbow’ (FT2320,1).

After these three visits Sharp expressed some disappointment that ‘the steps were very poor’ but that ‘evolutions, stick-tapping and clapping were good’ (Folk Dance Notes 1/80). At this time Sharp was struggling to fix some universal rules of morris stepping and was developing rather high-minded ideas about ancient traditions and purity of transmission. When in April 1910 he visited Michael Johnson, one of the ‘old’ Ilmington dancers (from 1886), he was relieved in a way when ‘Johnson danced the step to me exactly as Kimber dances it’ (Folk Dance Notes 1/135). Johnson was generally very critical of Sam’s ‘new’ side, as old men sometimes are of any changes to their cherished ways (see separate profiles of Johnson and Michael Handy).

Sharp never interviewed Sam Bennett again but Sam was his own man and began to collaborate with Mary Neal and the new Esperance Guild in public events in 1910. She had already interviewed Bennett in the summer of 1909 (no notes extant) and she published the ‘Maid of the Mill’ linked-hanky dance in her Esperance Morris Book’ Part 1, which came out in March 1910. Neal pointedly used Frank Kidson’s tune for the dance rather than using Sharp’s collected version. In May 1910 Sam Bennett appeared at a major Esperance event in London. Such developments irritated Sharp, so that when he eventually published the Ilmington dances in the revised (2nd ed) of the Morris Book Pt1 in 1912, he did not even acknowledge Sam’s help at all. Sam was subsequently interviewed by Clive Carey, the new musical director of the Esperance Guild in November 1910 and again in June 1912. Four more Ilmington dances appeared in Esperance Morris Book Pt2 in 1912.

The conclusion is that Sharp actually missed out on a lively morris tradition that did have good roots in history (not dissimilar from Headington, which he did espouse). Fortunately Lionel Bacon’s ‘Handbook of Morris Dancing’ (Morris Ring 1974 pp207-224) manages to stream the ‘old’ and the ‘new’ Ilmington material, adding subsequent researches so as to produce a coherent whole.

Sam Bennett continued to teach the Ilmington dances in his native village and despite some lapses and interruptions in the 20th century, the current Ilmington morris side has a good repertoire of tunes and dances to perform. Sam Bennett died on 13/2/1951, aged 85, leaving £4,188 in his will.

Thanks are due to researchers - 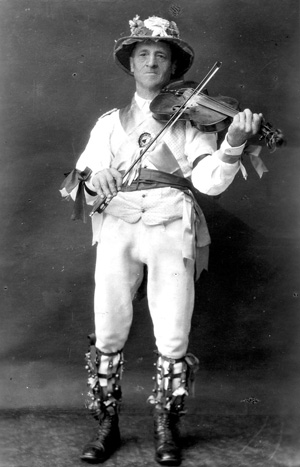