Betsy Holland was born in October qr 1879 (registered Tiverton 5b 413). She was the only daughter of 8 children of Thomas Holland, licensed hawker. After Sharp took the initial song from the young Betsy Holland, he pursued her over the Devon border to collect 3 more songs on 25 August at Huntshaw Cross, 9 miles south of Barnstaple. On 21 Aug 1907 Cecil Sharp wrote to his wife Constance about his first encounter with Betsy Holland: ‘We had decided to make our way (from Simonsbath) over the moor to Withypool and were just wheeling our cycles up the hill when …(we met) Betsy Holland, aged 26, … (who) began a murder song that was just fascinating. Talk of folk-singing! It was the finest and most characteristic bit of singing I had ever heard. Fiendishly difficult to take down, both words and music, but we eventually managed it! I cannot give you any idea what it was all like, but it was one of the most wonderful adventures I have ever had. I photo’ed the baby and her…’ (ref CJS1/12/18/10/61, quoted in Fox Strangways biography of Sharp OUP 1933 p41). The baby would have been her 3rd child John b1906.

Note: Sharp was accompanied on the first trip by Rev Frank Etherington, vicar of Minehead, whose handwriting it is in the Field Notebook (Words) ref CJS1/9/1/1907/2 p25. One reason why the song so excited Sharp was that it was the only folksong that he collected in Somerset which was in the Lydian mode. It wasn’t a particularly old song and told of a man who murdered his pregnant girlfriend, was apprehended and sent to the gallows. He published the song as ‘James MacDonald’ in Folk Songs from Somerset vol 4 (p87).

In January qr 1900 a wedding was registered at Taunton (ref 5c 448) for a Betsy Holland married to Morris Isaacs – this is probably ‘our’ Betsy, for in 1901 census (RG13/2265 f65 p13) at Brompton Ralph (12 miles west of Taunton) we find Betsy & ‘Maurice’ Isaacs with their first baby Thomas (11 months), living alongside Thomas Holland (father), aged 50 with wife Britannia and all his children. Maurice is listed as having been born in Wells, Somerset (no baptism trace) and baby Thomas at Dulverton. Baby Thomas was baptised later at Creech St Michael on 20/1/1905, listed as son of ‘Betsy & Henry Isaacs (licensed hawker). One must assume that Maurice and Henry Isaacs are one and the same man, for in the 1911 census (RG14/14166 schedule 63) Betsy and ‘Henry’ Isaacs were living in a ‘tent’ in Green Lane, Brendon Hill, Huish Champflower with son Thomas, 11, b Dulverton; Joseph 7 b Bishop’s Lydeard; John 5 b Rodhuish; Britannia 2 and Henry (infant) both b Brendon Hill. In his letter to his wife (above extract) Sharp named Betsy’s husband as ‘Henry’. One of Sharp's photos shows Betsy with her 2 eldest boys Thomas and Joseph, aged 6 and 3. In the 1911 census Betsy’s father Thomas and family are again living alongside them (schedule 62). It is believed that Betsy died in 1960. 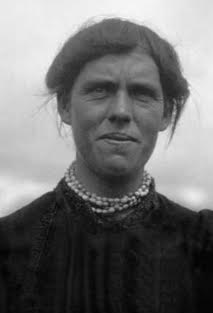