George Butterworth (1885-1916): George Butterworth was a composer best known for his orchestral idyll ‘The Banks of Green Willow’ and for his song settings of Housman’s poems ‘A Shropshire Lad’. This is not the place to discuss his merits as a composer but focus rather on his contributions to folk song and dance. Between 1906 and 1913 he collected over 300 folk songs, mostly in Sussex, where he was frequently accompanied by his friend Francis ‘Timmy’ Jekyll* (1882-1965), the nephew of horticulturalist Gertrude Jekyll. Butterworth did the melodies, while Jekyll did the words. The songs can be found in the digital archive at VWML in his own section. He was also a member of Sharp’s demonstration morris team for 3 years and collected dance traditions in his own right.

George Sainton Kaye Butterworth was born on 12/7/1885 at 16 Westbourne Sq, Paddington in London. He was baptised by his grandfather Rev George Butterworth, vicar of Deerhurst, nr Tewkesbury, Glos on 30/8/1885. George Jr was the only child of Alexander Butterworth, a solicitor working for Great Western Railways, and of Julia Marguerite (née Wigan), a soprano singer. Julia gave up her promising singing career and invested all her musical talent in her son. The Butterworths moved up to York in 1891, when Alexander became solicitor (and later general manager) of the North Eastern Railway.

George Butterworth learned the piano at an early age and performed as both a singer and an instrumentalist at Eton College and at Oxford University. He studied Greats at Trinity College from Oct 1904 to June 1908, where he was influenced by Hugh Allen (a future supporter of the Oxford Folk Music Society) and by the Professor of Music Sir Hubert Parry. At this time Parry was also Director at the Royal College of Music, where he taught Ralph Vaughan Williams and Gustav Holst. Parry was one of the four Vice-Presidents of the newly formed Folk-Song Society and Butterworth joined that Society in 1906. He became friends with Vaughan Williams that year and was in touch with Lucy Broadwood regarding folksongs he had already collected in Sussex.

In April 1907 Butterworth saw an Esperance Club concert of traditional songs and dances at the Queen’s Hall in London and thought it a ‘most delicious entertainment’. That summer he collected songs again in Sussex, notably ‘Banks of Green Willow’ from Mrs Cranstone of Billingshurst and 4 versions of ‘Green Bushes’.

After graduation in July 1908, Butterworth took a job for a year as a music critic on The Times newspaper, renting rooms in Bloomsbury. He then started a teaching job in Sept 1909 at Radley College, 5 miles S of Oxford, which enabled him to continue his contacts with the Oxford musical scene. Mary Neal had already visited Oxford to give lecture concerts in October 1908 and in June 1909, while Sharp had lectured there with William Kimber, the Headington morris dancer, in March 1909. Butterworth may actually have missed these occasions but at some point he became involved with folk dance, perhaps at the encouragement of his friend Reginald Tiddy (see separate profile). Tiddy was first a classics fellow (1905) then an English tutor at Butterworth’s college. He was another keen supporter of the Oxford Folk Music Society which was formed in 1910. Given that Butterworth was performing the morris in a public display in Feb 1912 and was even collecting dances in April 1912, one should assume a certain length of apprenticeship and it’s very possible that Butterworth began his dancing in Oxford during his Radley year*. Most probably he definitely attended the intensive training at Sharp's Stratford-upon-Avon Folk School in August 1911.

In London Sharp had a women’s morris team in place, based at the SW Polytechnic and able to perform at Chelsea Hospital in June 1909 before Edward VII. But he felt he needed a men’s team and had written to Alice Gomme to that effect on 10 Feb 1910, stating that Perceval Lucas was keen and knew ‘one or two men who would like to join’. In October 1910 Sharp began teaching a few 'diploma' men from SW Polytechnic including Claud Wright and James Paterson (see their profiles) and gradually a demonstration side came together.

In Sept 1910 Butterworth moved back to London to be with his parents who had just relocated from York. He enrolled at the Royal College of Music for one year’s tuition, then went off with Vaughan Williams to East Anglia, song collecting in October 1910. But in January 1911 Butterworth’s mother Julia died, aged 61 and he entered upon a very creative period of composing. It seems he attended the Stratford Summer School that year (Alexander Butterworth's 'Memorial Volume' p54) and also the Christmas School (Fox Strangways Biography of Sharp p87). Butterworth became a committee member of the EFDS (English Folk Dance Society) not long after it was formed in Dec 1911.

By 1912 he had left the Royal College of Music and after the première performance of Two English Idylls (based on Sussex folksongs) in February, he felt free to go morris dance collecting in the Bicester area of Oxfordshire in April that year. His diary of that fortnight is definitely worth reading (search GB/10 vol10 at vwml.org). After obtaining the Bucknell tunes and dances (see profiles of Rolfe and Powell), he worked with Sharp to produce Morris Book V, which came out in 1913.

Butterworth wrote piano accompaniments for 11 ‘Folk Songs from Sussex’ (preface dated 30/6/1912, published by Augener 1913). He also collaborated with Sharp to produce ‘Country Dance Book III’. The morris demonstration team danced at Kelmscott Manor in Oxfordshire in June 1912 and that was where the kinora films were shot - a kind of silent home movie (Youtubes or vwml.org scroll down Butterworth archive page). Butterworth is seen dancing jigs ‘Molly Oxford’ (Headington) and ‘I’ll go and enlist for a sailor’ (Sherborne).

In July 1912 Butterworth collected the morris dance from Filkins* (now danced by the Dartington morris men) and that autumn he collected rapper dances at Winlaton and North Walbottle in Tyne & Wear, and longsword from Escrick nr York. These appeared in Sword Dance Book III.      *Filkins is 5 miles N of Kelmscott

Sharp wrote to Maud Karpeles on 4 Mar 1913 (MK/3/29) saying that George Butterworth had written to him that ‘dancing was killing his music’ and that he had decided to give up dancing. Sharp thought this was a pity but in fact Butterworth kept dancing for another 18 months. He went with the EFDS team to Paris that June and danced at Burford that summer, hosted by the newly married William & Peggy Kettlewell (see Peggy Walsh profile).

In 1914 Butterworth’s Banks of Green Willow piece was premiered in Cheshire and he attended the Stratford Summer Schools again in August but when war broke out, he immediately enlisted in September and went for training.  He went with the 13th battalion of the Durham Light Infantry to France in 1915 and was killed by a sniper’s bullet at Pozieres village on 5 August 1916 during the battle of the Somme. Sharp heard the dreadful news when he was in America and wrote to his wife that ‘the news of Tiddy’s and George Butterworth’s deaths have just fairly done for me and bowled me over. In them I have lost two of my best friends…’ (see Tiddy profile for full quotation). Butterworth's body was never found but his name appears on the Thiepval Memorial. 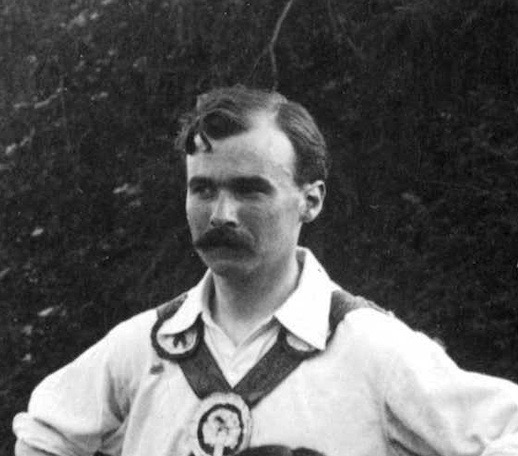