Edwin Clay was baptised on Xmas Day 1833 at Brailes church, eldest of 2 sons of Henry Clay, 'plush weaver' and his wife Mary, a schoolmistress. On 19/6/1856 at Brailes Edwin married Caroline Bailey, daughter of a shoemaker. Like his father, Edwin carried on the weaving trade and continued living in Upper Brailes village. He and Caroline had 10 children. She died aged 59 in Feb 1895, leaving £320 of her own money to Edwin (equivalent value in 2020 £42,000). Edwin went to live with his married daughter, who was a shopkeeper in the village. He died in January qr 1915 aged 81 (6d 1215).

Note on ‘plush weaving’: The weaving of woollen yarn and cotton into a velvet-like material called ‘plush’ was a thriving export industry in the Banbury area of North Oxfordshire for 200 years. The work was carried out by handloom weavers up to the mid 19th century, when power-loom weaving was introduced. There were 175 handloom weavers in the Banbury area in the 1841 census. Coventry was the only rival to Banbury in this line of work. The village of Shutford, 5 miles W of Banbury and 7 miles E of Brailes, remained in the plush trade by concentrating on the skilled manufacture of high quality plush for liveries, upholstery and furnishings. The business was finally closed in 1948. 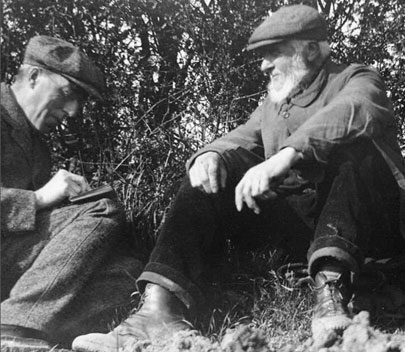