In his biography of Cecil Sharp, Fox Strangways* relates the story of when Sharp visited Priscilla Cooper on New Year’s Day 1908: He was noting songs by phonograph from a woman in a caravan, when suddenly she stopped singing and, turning deathly white, announced that she heard her husband approaching, and as he was of a jealous disposition she was afraid that he would kill Mr Sharp. Sharp did not want to be killed, and there was nothing for it but to present a bold face. Opening the caravan door, he shouted to the man: ‘A happy Christmas to you. Stop a moment and listen. I’ve got your wife’s voice in a box’. The man …was so amazed and delighted that he forgot to kill him, and, instead, they became great friends.

Only 2 census records appear for Priscilla, both at Colyton, Devon. The 1901 census has ‘Pricilla’ (RG13/2019 f61 p11) and 1911 ‘Pricella’ Cooper (RG14/12521 schedule 4). In 1901 at Stafford Common Thomas Cooper, 30, traveling gypsy born Bexleyheath, Kent is shown with wife Pricilla, 35, born Bournemouth, Hants. For occupation, it is written: 'here for a time, buying daffodils, primroses etc for London market.’ No children are listed. In 1911 Thomas Cooper, 45, is listed as a ‘licensed hawker’ alongside Priscilla, 46 and two other people – William Bignall, 72, boarder, single, b Maidstone and Phoebe Evans, 49, married, visitor. William Bignall was also present in 1901 and may be a relative. Priscilla’s DoB is therefore c1865.

Her maiden name is not yet known, nor details of her early family life. Thomas (Tommy) Cooper’s life, however, is more certain. He was baptized on 9/8/1868 at Christ church, Bexleyheath in Kent, 2nd child of Thomas Cooper Snr and his wife Mary Ann. Thomas Snr was a chimney sweep in 1871, a greengrocer in 1881 and a sweep again in 1891. Thomas Jnr had an older sister Phoebe, who married Alfred Evans on 14/8/1882. Alfred Evans was a fishmonger in Bexleyheath and it was indeed Phoebe who was visiting Tommy in 1911. Thomas Jr had a younger sister Charlotte, who married William Chapman in Jan qr 1887 (Dartford 2a 536). Further research is needed to establish Tommy’s gypsy background. His mother Mary Ann is only ever described in censuses vaguely as ‘born in Hampshire’. All this makes perfect sense when it is matched to the recent research findings of local historian Ken Clifford, who appealed in newspapers for anybody in Colyton who might remember Tommy & Priscilla Cooper. He discovered that around 1900 Tommy Cooper left London with Bill Chapman (brother-in-law) in search of particular plants (ferns) that would keep fish fresh by warding off flies etc. They found these plants near Colyton and packaged them off to London.

We can see therefore that Tommy was solving a problem for his other brother-in-law Alfred Evans and perhaps started a little business serving other London fish shops/markets too. Later on Tommy rented some fields and cropped daffodils and primroses to sell in London. All plants were dampened down and packed carefully on trains, which left Seaton via Axminster to Exeter and up to Waterloo. Journey time approx 5 hrs. Priscilla helped Tommy in his sideline collecting rags and at Christmas she sold holly wreaths and mistletoe. It is not known when she died. 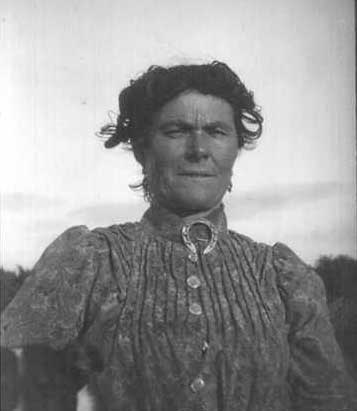