Daisy Daking, EFDS teacher (1884-1942):  Daisy Daking was a dance teacher who worked for the Oxford EFDS (English Folk Dance Society) branch and helped Janet Blunt collect some country dances at Adderbury. She is most well known for her work rehabilitating wounded soldiers in WW1 in France, using morris dancing to stretch limbs and raise spirits. It was surprisingly successful.

It’s not known what schooling Daisy received but she did not go to university. In July 1910 she was involved in a Sale of Needlework event in Barnet – ‘a well-laden stall of plain and fancy needlework presided over by…Misses Daisy and Molly Daking’ (Barnet Press 9 July 1910). This is an important reference because it shows she was still living in Barnet, that she was a good seamstress (she later made folk dance costumes) and that she was involved with a children’s charity (in this case the St Nicholas Home for ‘crippled children’). In addition the 1910 event had an entertainment of morris dancing and folksongs with girls from the Queen Elizabeth’s grammar school. Although it is not mentioned in the newspaper report, it is highly likely that Daisy Daking was involved in the dance training.

In the 1911 census Daisy is found at Barnes, ‘visiting’ a schoolmaster Sidney Forman and his wife Elizabeth. Daisy was listed as ‘Independent’ rather than having an occupation as such. She was not wealthy, as her father’s will left only £117. Most probably she was by this time a student at the Physical Training Dept of the South-Western Polytechnic Institute at Chelsea. Sharp had started his School of Morris Dancing there in Sept 1909. Maud & Helen Karpeles had attended the Shakespeare Festival at Stratford in May 1909 (MK/7/185 p18) and come across the folk dancing classes. They also began to attend Sharp’s classes at Chelsea. They were at the time working ‘3 or 4 days a week’ for the Invalid Children’s Aid Association at Canning Town (affiliated to the Mansfield House Settlement) in East London. They began to use singing games and folk dances in their work. It’s possible that Daisy Daking met the Karpeles sisters through this medium and perhaps joined their informal Folk Dance club.

In December 1911 the English Folk Dance Society was formally constituted in London. In January 1912, having received her various teaching certificates, Daisy Daking took over from Peggy Walsh in support of the Oxford branch of the new Society, which was inaugurated on 15 March 1912 (Oxfordshire Weekly News 27 March). Daisy had been coaching girls from Holy Trinity school in readiness for the evening’s entertainment. Sharp was present and Mr (Claud) Wright and Mr Tiddy performed jigs.

Soon after this Daisy began taking the morris classes at Adderbury*(Saturday mornings, cost of course 2/-). Daisy’s contact with Janet Blunt at this time led not only to her assistance in collecting some dances with her (JHB/17B/19) but also to a warm friendship, Daisy calling on her at the start of her caravan excursion in July 1914 (‘Log of the Fine Companion’ DCD/1).

When Daisy moved to Oxford (probably Jan 1912), her sister Molly, who had trained as a nurse, left a position in Lowestoft to join Daisy. Molly married Richard E Post in October qr 1913 (Headington 3a 2059). Their son Richard A Post was born in early 1914 but sadly Molly died soon after on 28/2/1914. The father did not support the child and is supposed to have gone to Canada. Daisy could not look after the baby, who was put into care – this is the baby referred to in Daisy’s log (referenced above, p7). Daisy is known to have suffered from bouts of depression in her life and if one considers that she was orphaned at age 4, lost her sister (aged 27) and perhaps felt guilty that she was unable to look after her baby nephew, one can see reasonable grounds for psychological difficulties.

She was, however, a dynamic teacher and was later described as ‘London born, deadly efficient, three feet high with classes so large she had to mount a high chair to conduct them’*. She may have been too small of stature to take part in Sharp’s demonstration sides but she certainly attended the Stratford Summer Schools and her diary of her 50-mile horse-drawn caravan trip from Oxford to Stratford (Log of The Fine Companion) wonderfully captures the end of an era - war is declared on August 4th, just as they arrived in Stratford but ‘Mr Sharp has decided to carry on the school as long as possible’.

Some supporters on this trip were known by initials - she starts her diary in the first person but once the journey is underway (p11) she refers to herself as 'D'.  The caravan could accommodate 2 people and the other occupant was 'P'. Hilary Clare suggests that 'P' was Gladys Marguerite Girdlestone** (her middle name perhaps being abbreviated to Peg or Peggy). Certainly a telegram was sent to 'Daking-Girdlestone' on their arrival at Stratford (p32) and photographs also support this proposition. It seems that fellow dancer Phyllis Marshall, with whom Daisy shared a house at 11 Woodstock Rd, did not accompany her to Stratford. Also mentioned in the Log are: members of the Vidal family - Lance (27), John (19) and Lois (25) from a clerical family at Foxcombe Hill (1911 census); Mrs Charlotte Sidgwick of 64 Woodstock Rd, a don’s wife and secretary of the Oxford EFDS; 2 mysterious men, one named Alec (identified as Alexander Hepburn-Scott, killed at Ypres May 1915) and the other called ‘Constant Billy’; and Miss Blunt (as already mentioned). See Hilary Clare 'The Fine Companion' (Abbey Chronicle 2011 pp41-72). Note: Lance Vidal was a keen morris dancer, who joined the staff at Radley College the same year as George Butterworth (1909-10) and perhaps they learned together. See Butterworth's profile.

In Sept 1914 Daisy left to do EFDS teaching in the Newcastle area for a lengthy spell. She went out to France in 1917 and it was the YMCA who approached the EFDS to appoint Daisy to carry out rehabilitation work in the Convalescent camps behind the trenches. Photographs and her diary entries of her dance therapy work are on the vwml website.

** Log companion, Gladys Girdlestone (1884-1966) achieved her EFDS certificates, worked with Daisy in the rehabilitative dance programme in France in the war and married David Donaldson in 1919.

Daisy's work in France was cut short in 1920 due to lack of funds but she was much in demand back home as a teacher, spending a few years based at the new YMCA buildings at Plaistow and serving on the national EFDS committee till 1926. When WW2 broke out, Daisy volunteered her experience again to the war effort but it was declined. For whatever reason, Daisy sadly took her own life on 10 May 1942, aged 57.

It’s important to realise the very liberating and progressive elements in the folkdance revival, which Daisy and many other young women grasped and enjoyed. Around two thirds of EFDS members in the early years were women. Daisy featured as a fictional character ‘Pixie’ in the books of Elsie J Oxenham in the 1920s (the Abbey Girl books). Hilary Clare of the EJO Society has produced an online biography of Daisy Daking. 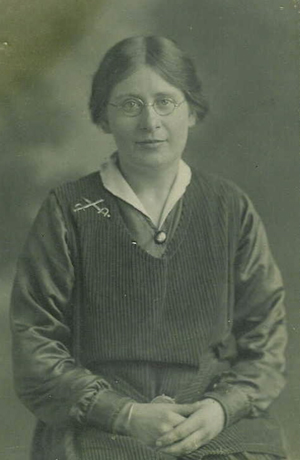