Hathaway was fiddler for the Lower Swell morris side, which was closely allied to the Longborough side. Eight of William’s tunes appear in the Longborough section of Lionel Bacon’s Handbook of Morris Dances, so dancers today still step to his tunes*. It was his (illegitimate) son William Charles Stagg, one of the ‘Whistling Sewermen’, who tipped Sharp off as to the morris musicians he should trace in Gloucestershire (Paul Burgess article Folk Music Journal 2002).

William Hathaway was brought up by his grandparents William and Jane Hathaway and such an arrangement often indicated some sort of family disruption. It’s probable that he was born in May 1841 at Lower Swell (a mile west of Stow-on-the-Wold) and that he was the illegitimate son of Caroline Hathaway. She was the eldest child of William & Jane and had been baptised at Lower Swell 15/4/1821. In the June 1841 census she was living at Lower Swell with Henry Shepperd, carpenter, probably as a common law wife (no wedding entry has yet been found for Henry and Caroline). Baby William is shown as ‘1 month’ and he was subsequently baptised as ‘William Shepherd’ on 18/7/1841 at Lower Swell church.

Perhaps his parents then split up, because there are wedding entries for Henry Shepherd (to Fanny Mason in Dec 1848 in Stow) and also for Caroline Hathaway (‘daughter of Wm Hathaway’) to John Baldwin on 24/8/1844 at Lower Swell. Caroline Baldwin was buried a year later, aged 24, on 14/7/1845 at Lower Swell church. So, with his father gone away and his mother deceased, William was taken in by his grandparents and took their name. For diplomacy when signing his wedding register, he stated that he was son of ‘Henry Hathaway’, labourer (a nice compromise).

He married Eliza Stagg (Oddington church 13/3/1866), who had already given birth to his son William Charles Stagg in October qr 1865 (6a 338). In 1881 census he was back in Lower Swell, aged 39 and it was around this time that he must have begun playing fiddle for the Lower Swell side. William Hathaway was a shoemaker by trade and obtained his first fiddle from Charles Hughes in exchange for a pair of boots (Folk Dance Notes for Naunton ref CJS2/11/1/81). William had moved to Cheltenham by 1891 census. In 1901 census William was aged 59 and was described (in the margin) as ‘blind in one eye’ (RG13/2461 f72 p30). Sharp did also note that he was ‘lame’. In the 1911 census the widowed Eliza Hathaway stated that she had borne 9 children, of whom 6 survived into adulthood. William was buried at Cheltenham on 25/1/1910 aged 68. 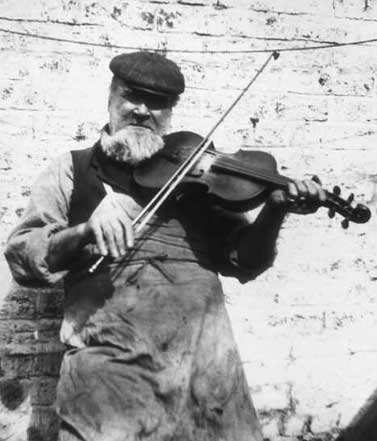