John Henry England of Hambridge, South Somerset: age 38 1 song 'Seeds of Love' on 22 Aug 1903: This was the first folksong that Cecil Sharp ever collected. He was staying with his long-time friend Rev Charles Marson at his vicarage in Hambridge. John England was Marson's gardener and he was mowing the lawn (with horse-drawn mower) as he sang the song. Sharp knew the song but not John's tune. Click vwml link above:

John England was baptised on May 7 1865 in Hambridge church, son of Joseph England and wife Mary Ann (née Edmonds). Mary Ann was the daughter of Henry Edmonds (b1798, fruiterer) and she had an older brother John Edmonds (b1829) whose daughter Sarah married Joseph Ree. So Sarah Ree and John England were cousins.

John England was an only child, as his father died young. Mary Ann is shown as a widow age 32 in the 1871 census with John aged 6 and in 1881 census she was a buttonholer while John was an agricultural labourer aged 16. On 15 June 1886 in Barrington church John England married Rose Morris, daughter of John Morris, sexton of Barrington. In 1891 census John was a ‘gardener’ and he and Rose have 2 boys Joseph & Herbert. In 1901 (RG13 2289 f41 p10) he is listed as Age 36 Gardener Domestic, b Westport, with wife Rose who is aged 36, no profession, b Barrington. Children are Joseph Henry age 13 Farm Labourer, Herbert John age 10, Kathleen Mary age 1 and Albert Edward age 1month.

John England was sexton of the parish and lived in the house behind the church. The family emigrated to Saskatchewan Canada in 1911. John died in 1940, Rose in 1957. 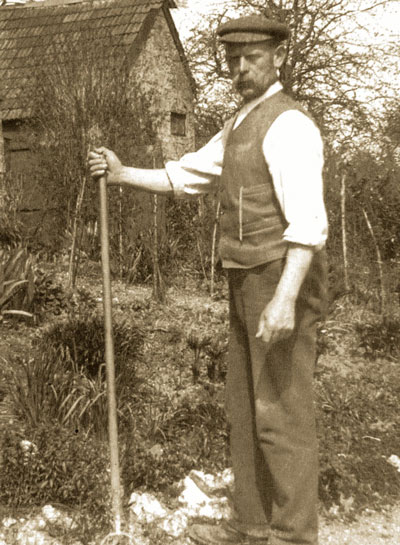