Helen Karpeles (1888-1976): Helen was introduced to morris and country dancing at the Stratford Shakespeare Festival in May 1909 and, with her sister Maud, started an informal Folk Dance Club at her parents’ house in London. She became a member of Sharp’s women’s dance team from 1910 onwards. She was elected Hon Sec of the new English Folk Dance Society in 1911 and married Douglas Kennedy, fellow dancer on 29 September 1914 in Kensington – he was 21, she was 25.

Helen May Karpeles was born at 33 Lancaster Gate, Bayswater on 17/5/1888, fourth daughter of Joseph Nicolaus Karpeles, tea merchant and stockbroker, and his wife Emily. Joseph was born in Hamburg but became a naturalised British subject in 1881; Emily was born in London, daughter of Henry Raphael, a foreign banker. They were both of Jewish ancestry but were non-practising. Helen’s older sisters were Lucy (b1882), Florence (b1884) and Maud (b1885). A brother Arthur was born in 1895. Soon after this, the family moved to 87 Westbourne Terrace, Paddington, where they stayed until Emily’s death in 1914.

Helen followed her older sisters in attending boarding school at Hamilton House, Tunbridge Wells, Kent. She probably left school in 1907, by which time her sister Maud had commenced volunteer work with the Invalid Children’s Aid Association at the Mansfield House Settlement at Canning Town*. In due course Helen joined Maud in this voluntary work, visiting disabled children at home in the East Ham and Barking areas of East London. One of the weekly activities provided was a Guild of Play meeting when the children came together to sing action songs and make up dances - Maud was a competent pianist.

*For the work at Canning Town see research by Ju Gosling http://www.ju90.co.uk/ctfolk/ctfolk3.htm

In May 1909 the two sisters attended the Shakespeare Festival at Stratford-upon-Avon and happened to see some folk song and folk dance competitions going on. Thinking these might provide some inspiration for their children’s activities, they watched the whole programme and met Cecil Sharp, one of the judges. When he commenced his School of morris dancing at the South Western Polytechnic at Chelsea in Sept 1909, Maud and Helen enrolled in the evening classes he also ran there (open to the public). They so enjoyed the experience that they started an informal Folk Dance Club at their home in Westbourne Terrace.

In her unpublished autobiography (MK/7/185 p20) Maud described how the girls would remove all rugs and furniture and ruin the highly polished parquet floor with a plentiful supply of vim (presumably to give the floor 'grip'), without protest from their long-suffering parents. The resultant women's folk dance team performed at several public events in 1910 and 1911. On 16 May (Whit Monday) 1910 Maud and Helen went with Sharp to watch the Bampton morris dancers and he then wrote that he was keen to recruit both sisters to be part of his teaching team (letter MK/3/1 19 May). A few weeks later on 31 May members of the SW Polytechnic performed at a concert at the Queen's (Small) Hall where their 'grace, skill and discipline provoked universal admiration' (Daily Telegraph and Courier 1 June 1910). A year later on 3 April 1911 the Folk Dance Club gave a successful public performance at the Portman Rooms in Baker Street to raise funds for the Invalid Children's Aid Association (Westminster Gazette notice Wed 29 March 1911).

At this new club Helen Karpeles met Douglas Kennedy, whose sister was already a member (see profiles of Helen & Douglas Kennedy). Helen Karpeles married Douglas on 29/9/1914 soon after he had enlisted in the London Scottish Regiment. Their first son David was born in April qr 1917 and a second son Peter was born 18/11/1922. David, a Sub-Lieutenant in the Navy, died on active service on the destroyer HMS Glowworm on 8/4/1940. Peter Kennedy had a career recording and publishing folk songs in the 1950s, including work at the BBC. His archive is held at the British Library. He died on 10/6/2006.

Douglas Kennedy retired as Director of the English Folk Dance and Song Society in 1961, and he and Helen were able to enjoy their boat in Waldringfield, Suffolk in later years. Helen Kennedy died on 24/3/1976.

Note: Although younger than Maud, Helen was considerably taller than her sister (as in photo attached). See them dancing together in the kinora films (early home movie) 'Lumps of Plum Pudding' film 3  https://youtu.be/bQEkXMCusuI 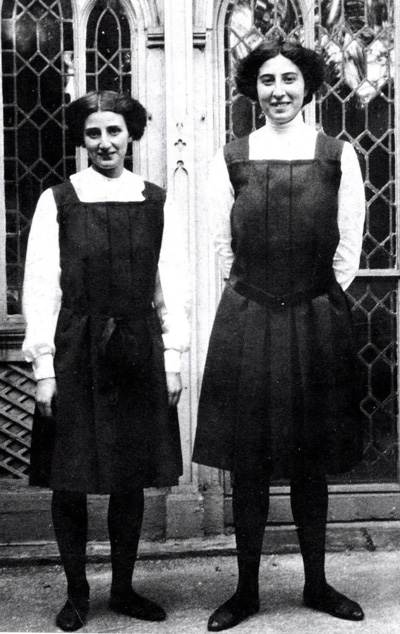