Douglas Kennedy OBE (1893-1988): Douglas Kennedy was a member of Sharp’s demonstration morris team and took over from him as Director of the English Folk Dance Society in 1924.This website is not the place to discuss Kennedy’s work as Director but focus on his early dancing role:

Douglas Neil Kennedy was born in Edinburgh on 11/5/1893, second child of John Henderson Kennedy, solicitor, and his wife Patricia Grieve Kennedy. Douglas’s grandfather David Kennedy (b1825) began a singing career in 1848, specialising in Burns and traditional Scottish songs. He conducted lengthy tours to the USA, Canada, Australia, New Zealand and South Africa; his second wife Elizabeth and children sometimes accompanied him. David Kennedy died in Canada in 1886, so Douglas never knew his grandfather but music and showmanship seemed to pass to him.

Douglas went to George Watson’s College in Edinburgh and the family was in Edinburgh for the 1901 census but soon afterwards moved to London where sadly Douglas’s mother died in October qr 1906 (Kensington 1a 68), aged 43. In Sept 1907 his older sister Helen (see separate profile) enrolled on a 2-year course at the Chelsea Physical Training School (South Western Polytechnic), where in early 1909 she began learning morris dances with Cecil Sharp. Meanwhile Douglas had attended Mercers School at Holborn and then had a spell abroad in Germany. By early 1911 he had enrolled at the Chelsea Polytechnic to study science subjects and the April census that year (RG14/2257) confirms this – he was 17, living with his father at 40 Manor Rd, Clapham. His father John, 44, was now listed as a teacher of singing and had recently been remarried to Dorothea Matthay, a music teacher (Apr qr 1909 1a 1197).

Through his sister, Douglas had been invited to join the Karpeles Folk Dance Club and performed with them on 1 Dec 1911 at Kensington Town Hall. He joined the English Folk Dance Society at its inaugural meeting a week later and performed with the new men’s demonstration team on 27 Feb 1912 at Suffolk Street Galleries off Pall Mall. He was not yet 19 and was the youngest member of the team. His father John died two weeks later in Bristol, aged only 45 and Douglas had to set his own course. In Sept 1912 he gained a place to study botany at Imperial College, London and had completed his 2nd year when war broke out. He enlisted to serve with the 14th Battalion of the London Regiment, London Scottish. On 28 September 1914 he married Helen Karpeles in Kensington – he was 21, she was 25.

After the war Douglas Kennedy returned to Imperial College to teach botany. He was no doubt upset by the tragic loss of four of his fellow dancers in the war (Butterworth, Lucas, Tiddy and Wilkinson) but he went on to lead a new demonstration team in the 1920s both at home and abroad. Sharp died in June 1924 and Douglas Kennedy took over from him as Director of the English Folk Dance Society in 1925. When amalgamation with the Folk-Song Society took effect on 31 March 1932, Douglas led the new Society until his retirement in 1961. He was elected Squire of the Morris Ring in 1938 (until 1947). He was awarded an OBE in 1952.

Douglas and Helen Kennedy had two sons – John, who served in the Navy and died on active service in 1940. Younger son Peter Kennedy (1922-2006) collected and published folk songs starting in the 1950s.

After his retirement Douglas Kennedy enjoyed boating near his Suffolk home at Waldringfield. His wife Helen died in March 1976 and he was remarried to Elizabeth Ogden in Dec that year. He died on 7 Jan 1988, aged 94.

Obituaries of Douglas Kennedy can be found in the Folk Music Journal vol5 no.4 1988 and in the Morris Ring Circular issue 13 Jly 1988. See also entry in the Dictionary of National Biography by Michael Heaney. 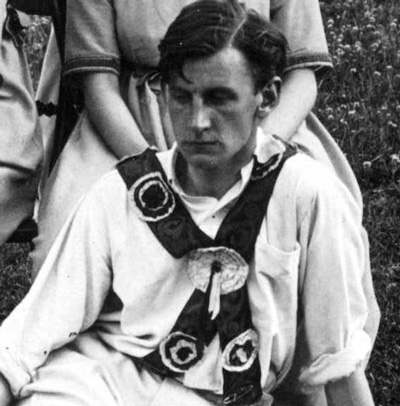