Louie (Louisa) Hooper of Westport (1860-1946): 37 solo songs (+19 duets with half-sister Lucy White, see Lucy's profile): Westport was the terminus of a new canal that was built in 1840 to carry goods to/from Langport town but the completion of the railway line from Yeovil to Langport in 1853 reduced traffic and the canal was closed in 1875 (click Area link above for map). It was, however, a busy little village when Louie was growing up. It lay just half a mile south of Hambridge but was served by the same church and clergyman (Rev Charles Marson, appointed in 1895, see his profile). When Cecil Sharp first visited Marson at Hambridge vicarage in August 1903, he was soon introduced to Louie Hooper and visited her (and Lucy White) frequently to share and compare songs. It's fair to say that if he had not had the good fortune to meet two singers with such a rich repertoire of folk songs, Sharp may never have embarked upon his great collection of songs.

Louisa England was baptised at Hambridge church on 2/9/1860, daughter of William & Sarah England of Westport. By all accounts as a child she had a bad or disabled leg that discharged her from some schooling (disability not actually recorded in either 1871 or 1881 censuses). Her mother Sarah had a reputation as a good singer but she died in 1892, so Sharp never met Sarah. In 1871 census, aged 10, Louie was not described as a ‘scholar’ but as a ‘collar worker’ and in 1881 as a ‘buttonhole worker’.

On 12 Feb 1884 in Hambridge church Louisa England married George Henry Hooper, labourer. George was the illegitimate son of a (different) Louisa Hooper of Puckington, baptised there 31/3/1854 (no father was listed). George's mother then married Benjamin Goodland (reg Taunton dist Oct qr 1859 5c 739) and in 1871 George was living with his mother and stepfather in their house in Westport Row. Unfortunately just weeks after his wedding to Louie, George Henry Hooper died ‘aged 30’ and was buried at Hambridge church on 20 March 1884.

Note on Louie Hooper’s social status and on source of her songs: Louie kept the Hooper surname and was effectively a ‘single Mum’. She attracted coal charity money every Xmas (as distributed by Rev Marson) and must have been hard up most of the time. Rev Etherington’s unpublished biography of Rev Marson includes a letter from Louie: ‘… when I was still very young, all the women in this village did glovemaking and they used small machines – not the sort they use now - they could carry them about from house to house easily. I used to cut off the ends for them, and … while they worked, they would sing the old songs and I learnt them all, and would sing them over to myself and listen over and over. And that’s how I got them’. 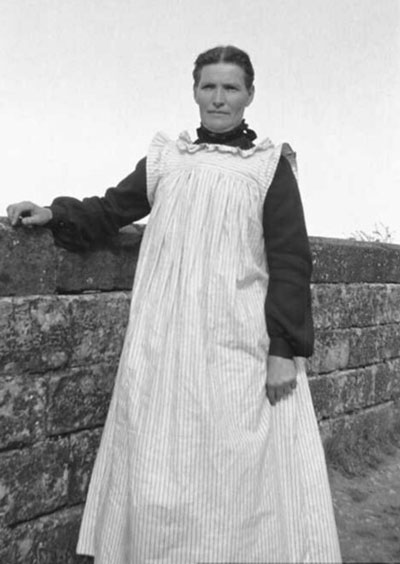