Perceval Lucas (1879-1916): Perceval Drewett Lucas was a member of Cecil Sharp’s demonstration morris team. He was born in October qr 1879 at Hove (reg 2b 308), 6th of 7 children of Alfred Lucas, insurance agent and his wife Jane (née Drewett). His older brother Edward Verrall Lucas (1868-1938) was a journalist and author, who was also a keen supporter of the folk music movement and perhaps recommended his brother to join Sharp’s morris team.

Sharp had been appointed Director of the School of Morris Dancing based at the South West Polytechnic Institute at Chelsea in Sept 1909 and quite soon had a women’s morris team in training. He then enlisted 2 male students – A Claud Wright and James Paterson – and invited 4 men from outside the college to complete a men’s team. These were: George Butterworth, George Wilkinson, Douglas Kennedy and Perceval Lucas. Reginald Tiddy would join later. The team would perform at Sharp’s lectures, at various public events and at Stratford Summer Schools up until the outbreak of war.

Although he was registered at birth as ‘Percival’, in his adult years he called himself ‘Perceval’. He was enrolled as a medical student at University College Hospital in 1903 as ‘Perceval’ but does not seem to have completed his training. In April qr 1907 (again as Perceval) he married Madeline Mary Eve Meynell, daughter of the writer Alice Meynell, at Marylebone (reg 1a 1236). In the 1911 census they were living at 13 Warrington Cresc, Maida Vale, West London with 2 young daughters Sylvia and Christian, and 1 servant. Perceval’s occupation was described as ‘antiquarian author and record agent’.

Perceval Lucas enrolled as a private in the Royal Fusiliers but was then commissioned in the 10th Border Regiment and was killed at the Somme on 6 July 1916, aged 36. Fellow dancers George Wilkinson, Reginald Tiddy and George Wilkinson were also killed within a 6 week period (see separate profiles). Perceval was buried at Abbeville cemetery. 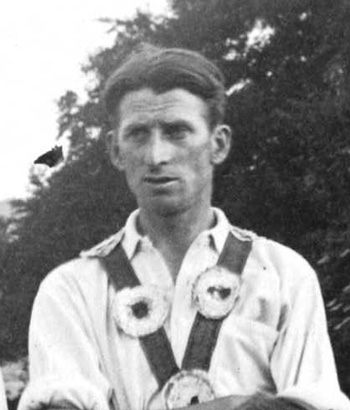