Herbert Charles MacIlwaine (1858-1916) was the Musical Director of the Esperance Girls' Club at Cumberland Market (between Regent's Park and Euston) between 1902 and 1908. He had a hand in getting Cecil Sharp to meet Mary Neal, as a result of which William Kimber came up from Oxford to teach the Headington Quarry morris dances to the girls there. The best dancer was Florrie Warren and she helped MacIlwaine develop the stepping notation for the dances ready for Morris Books 1 and 2 (1907 and 1909). In Aug 1909 MacIlwaine accompanied Sharp to Oxfordshire to obtain the Bampton dances from William Wells ready for Morris Book 3 (1911) but took no part in the last Morris Books 4 & 5. He was crucial to Sharp's development as a collector of dances. He did not, however, agree with Sharp's communal theory (see Mattie Kay's comment CJS1/12/11/1/1 p1).

Herbert MacIlwaine was born on 13 November 1858 in Belfast, son of Rev Dr William MacIlwaine, canon of Belfast Cathedral, and his wife Mary. After graduating from Trinity College Dublin, Herbert (like Cecil Sharp) spent eight years (1885-93) in Australia. He and his older brother Arthur were partners in a horsebreeding venture at Mullaburra, near Mount Garnet 100 miles SW of Cairns in Queensland. It was a lonely existence and eventually the business failed. However, Herbert was a shareholder in the Townsville Herald Newspaper Company and got a job there as a journalist before returning to London, where he worked as a reader for the publishers Archibald Constable & Co. He then wrote a number of thoughtful stories about the colonial experience, particularly describing bush life and aborigine/pioneer relations. These fourteen stories were published in both countries.

In the 1911 census Herbert MacIlwaine was living in Ormiston Rd (now Ormiston Grove) near Shepherd's Bush and soon afterwards married his housekeeper Ethel Willett (Fulham reg 1a 699). He was 52 and she was a young widow aged 28. They had a son Anthony but MacIlwaine died on 1/10/1916 aged 57. Anthony was later adopted by Mary Neal. 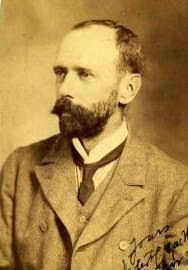