Mary Jane Woodland was baptized on 4/5/1862 at Hambridge church, daughter of Samuel Woodland, an agricultural labourer and his wife Mary Ann in Westport. They had 11 children, Mary Jane being 9th and Elizabeth (Lizzie) being the last. Field Notebook Tunes 1904 (4) p1 notes that Mary Jane learned ‘Unquiet Grave’ from her mother Mary Ann when she was a child. Her sister Lizzie would later marry George Welch and sang 15 songs for Sharp.

In 1861 census Samuel Woodland’s family is shown in Puckington (RG9/1632 f68 p8) living next door to (William &) Sarah England 35, glover, mother of Lucy Bridge (later White) and Louisa England (later Hooper). Mary Jane had not yet been born and it’s not clear for how long the two families lived so close. By 1871 census Mary Jane had moved to Westport, was aged 9, a glover sewer, so perhaps not much schooling.

Mary Jane got married to William Ree (b1859), labourer of Westport on 3/7/1882; she made a mark instead of signing her name, so was illiterate. William Ree became a carter for the brewery in Hambridge and the couple had 4 children. The photo of Mary Jane Ree shows a young girl with her, who was probably Dorothy (Dot), aged 13 approx. Mary Jane would have been 42. She probably died Dec qr 1924. 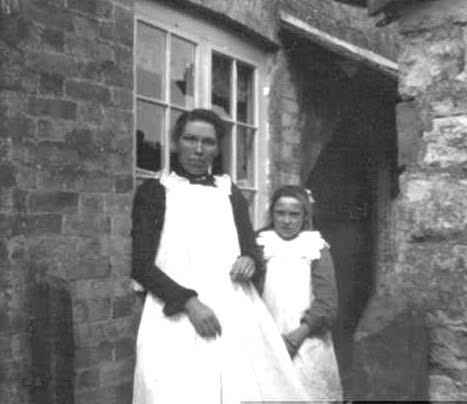