Susan Williams of Haselbury Plucknett (1832-1915): age 73, 22 songs over 5 visits commencing 23 Aug 1905. In the Musical Times of 1 Jan 1907 Sharp described Susan as 'one of the most delightful singers and pleasant companions it has been my good fortune to meet ... I cannot reproduce the charm of her voice - sweet and pure as the note of the woodland thrush'. He published 2 of her songs in Folk Songs from Somerset vol3, namely 'Farewell Nancy' (FT699) and 'The Keys of Heaven' (FW926: in tandem with the singer Harriet Young):

Susan’s maiden name is believed to be Hallett, born in 1832 in North Perrott, one mile south of Haselbury Plucknett. Her father Benjamin was a shoemaker. She married John Wiliams, agricultural labourer and then lived the rest of her life in Haselbury Plucknett. They had 6 children. Susan was a (linen) web weaver in all the censuses from 1871-1901 and seems to have lived in the same house too (Peggy’s Lane and Factory Lane are the same lane). Flax and hemp grown locally had been processed in factories in Crewkerne and West Coker to produce sailcloth and ropes for naval ships (incl Nelson’s ships). In the 1911 census she made a mark rather than sign her name, so she was probably illiterate. Susan lost her husband John in Feb 1886 and was thus widowed for nearly 30 years. But she lived next door or close by her eldest son Thomas, wife Ann and 6 grandchildren. She was 73 when she met Sharp and she died 4/3/1915 aged 83. 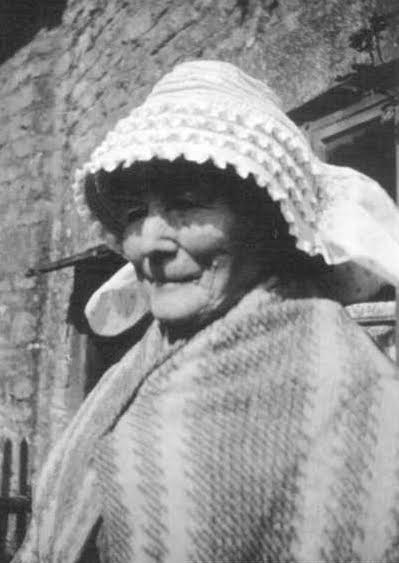