Rev Dr Alfred Allen Brockington (1872-1938) was the intermediary for Sharp in meeting John Short, the shanty singer of Watchet. Brockington was born in Birmingham, the son of a goldbeater. He took a first class degree in English History, Language and Literature at the University of London in 1891 and achieved a Ph.D. in 1931. He was married with 4 children.

After various curacies in Somerset, he was appointed to St Mary’s Taunton (1905-11), which is where he first met Sharp. He was then made Vicar of Carhampton with Rodhuish between 1911-15. He served as a chaplain in the services during WW1, then moved up to Liverpool and eventually Cheshire, where he died on 4/7/1938. He wrote 8 books about miracles and mysticism. 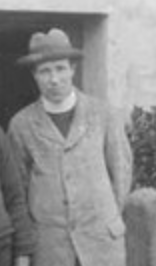