Marjory Wortley Sinclair was born on 6/8/1890 at Merton, Surrey, 3rd child of Edward Sinclair, accountant, and his wife Louisa Jane. Edward was from Ireland and Louisa was from London. In the 1901 census the Sinclair family was in Clifton, Bristol (RG13/2367 f64 p17). In the 1911 census Marjory was aged 20, a PT student in student accommodation at Carlisle Sq, Chelsea. In the 1939 Register she was single, a teacher of English and folk dancing at Malling, Kent. The 1921 census will provide more information.

*Miss Tuttiett may not have attended the SW Polytechnic but was reported as an EFDS teacher Gloucestershire Echo 29 April 1913. She attended the Stratford Summer School in 1914 and is photographed as part of the dancing team (incorrectly named 'Tulliett'). 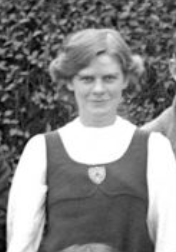