Note: There does not seem to have been a morris side per se at Shipston. There’s a description of morris dancers from local villages converging on Shipston to dance on May 1st (in conjunction with Jack-in-the-Green events) in FDN (Folk Dance Notes) vol2/p34. This dancing apparently stopped '45 years ago' (i.e. c1865). There’s also a brief mention of Henry Sturch in FDN 1/78.

Henry Sturch was baptised at Shipston-on-Stour on 1/8/1830, 2nd child and eldest of 5 sons of James Sturch and his wife Jane. James Sturch was a baker and all his sons appear to be helping James in the baking trade in the 1851 census at Shipston. On 11/5/1857 Henry married Mary Ann Ghilson (Gillson) at St Philip’s Birmingham. The couple settled back at Shipston and had 6 children. Henry was an agricultural labourer in the 1861 census and a ‘baker’ again in 1871. In the following censuses he was a ‘general dealer’, a ‘hawker’ and a ‘pedlar’ but always operating at Stratford Rd, Shipston.

Henry was in his 80th year when he met Sharp but gave him some lively tunes and looked robust in Sharp’s photo of him. He did, however, pass away just 5 months later and was buried on 29/1/1910 at Shipston. 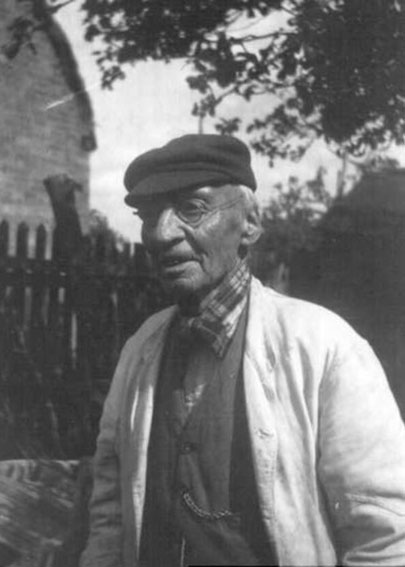