George Jerrard Wilkinson (1885-1916): George Wilkinson was a young composer who not only worked with Sharp as an assistant music teacher at Ludgrove School but also was a member of Sharp’s demonstration morris side. His life is well documented by Georgina Boyes in ‘English Dance and Song’ magazine vol 74 no.3 Autumn 2012.

According to his Army records, George J Wilkinson was born on 16/8/1885. His birth was certainly registered in July qr 1885 (King’s Norton 6c 434). He was the 4th child of Rev Willoughby Wilkinson, vicar of St Luke’s Birmingham, and his wife Amy. He went to Uppingham School (Sharp’s old school) in Rutland, which was known for its musical education. He played the cello, piano and organ and won a music scholarship to Gonville & Caius college, Cambridge. He graduated in 1908 and went for further studies to Munich.

Wilkinson returned in 1909 and happened to get in touch with Sharp about folksong. Sharp had been the part-time music teacher at Ludgrove preparatory school in North London since 1893 but was now increasingly busy with his various folk projects. He was able to take Wilkinson on as his assistant during his last year at the school. The school newsletter* at the end of the summer term 1910 (dated 26 July) stated: ‘It is with very great regret that we have to announce that Mr CJ Sharp has felt it necessary to resign his position here. He has been connected with Ludgrove practically since the school was started – his loss will be a very real one. It is indeed almost impossible to estimate the debt that is owed to Mr Sharp for what he has done here. He has worked with unfailing patience and tact, and has always shown himself keenly interested in everything to do with the school. His place will be taken by Mr GJ Wilkinson of Caius College Cambridge who has for the last year been helping Mr Sharp in his work here.’

Sharp first wrote to Wilkinson on 11 July 1909 to interest him in a job sharing at Ludgrove and it's likely that Wilkinson was present at Sharp’s final lecture at the school on November 20th (1909) when Mattie Kay sang 10 songs and Sharp played the pipe and tabor. Sharp's more definite offer of employment from January 1910 onwards is in his letter to Wilkinson of 30 Oct 1909 (CJS1/12/21/7/2 at vwml).

Wilkinson did compose some original music (not much performed today) and also did some arrangements of folksongs (no manuscripts survive). In ‘English Folk Dance Society News’ (1924) an article commented that ‘his (Wilkinson’s) arrangements of some of Mr Sharp’s folk-songs with pianoforte and string accompaniments are probably known to a good many readers…His dancing was a lesson in perfect finish and accuracy’.

His job at Ludgrove being part-time, Wilkinson was able to stay and work at the Caius Mission House in Battersea (1911 census ref RG14/2195). But he was free to take part in the Stratford summer schools and various dance events. Soon after the outbreak of war, Wilkinson enlisted in December 1914 in the Middlesex Regiment and was killed on the first day of the Somme offensive July 1st 1916. He has no known grave but his name ‘Sergeant George Wilkinson’ appears on the Thiepval memorial.

*Ludgrove newsletter noted by David Sutcliffe on his visit to the school in August 1998, with permission of headmaster Mr Barber. 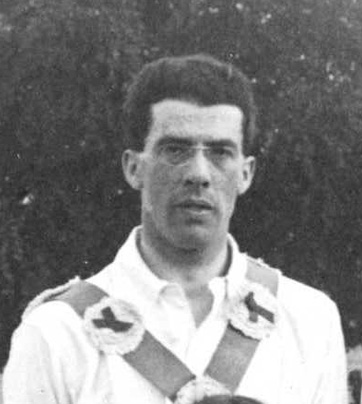