Claud Wright’s parents were aspirational people. Arthur Wright later became a Manual Instructor for the London County Council schools and Alice became a headmistress at a Stepney school. Arthur had been a skilled craftsman, constructing not only small pieces but also large frames and even lorry chassis, which Claud, as a young man, would deliver to coach builders. This work gave him great upper body strength. In 1908 he enrolled on the physical education and gymnastics training programme at the South Western Polytechnic Institute at Chelsea. When Sharp was appointed as Director of the School of Morris Dancing at the Polytechnic in Sept 1909, he noted the strong athletic prowess of Claud Wright and later enrolled him in his demonstration men’s morris team along with his fellow student James Paterson (see separate profile).

In 1909 the Board of Education had approved morris and folk dancing for use within schools alongside gymnastics and games and the Chelsea Polytechnic was the leading organisation at the time. It trained teachers (mostly women) in the new Scandinavian programmes of physical education, which were replacing the military drill regimes currently in place. Sharp was a bit disparaging about ‘musical gym’ and hoped to set high artistic standards in his new training programme.

Claud Wright was an excellent dancer – he performed solo jigs and took quickly to the new sword dances that Sharp was busy collecting in 1910-13. He was also an inspirational teacher, who, upon graduation in 1910, was contracted to several London schools and even set up his own centres.  His Tottenham centre attracted over 200 students. All this work went alongside his commitments to Sharp’s demonstration side.

After the Stratford Summer Schools of 1912, Claud Wright was approached by George Baker, professor of Dramatic Literature at Harvard University, to visit America to conduct teaching tours in New England. Because of his already successful teaching ventures in London, Wright felt he was a free agent and was keen to take up the invitation but Sharp, whether through jealousy or the absence of formal approach, was not very supportive. Wright went anyway and was successful, earning $150 (£30) over and above travel expenses. He would go again in the summer of 1914, just prior to the outbreak of war. But he was never welcomed back into Sharp’s demonstration side, Reginald Tiddy taking his place (see separate profile).

Sharp himself sailed for America in December 1914 and no doubt Wright felt sidelined. But he put it behind him by enlisting in the Royal Flying Corps and learning to fly a bi-plane in the spring of 1915. He saw active service at the Western Front (July-November) and returned to England to train new pilots. There he met and married Elise Mary Rodwell in Teignmouth on 1/8/1916. They had 5 children and he continued his career in the RAF, retiring as an Air Commodore in 1942.

Claud Wright loved new ideas and entered into all projects with great enthusiasm. His physical power did not (in the end) fit well with Sharp’s vision of the folk dance movement but Wright’s contributions in the early stages of the folk dance movement deserved more recognition. For a full appraisal of Wright’s dancing achievements, see James C. Brickwedde ‘A. Claud Wright: Cecil Sharp’s Forgotten Dancer’ Folk Music Journal 1990 vol6 number 1 pp. 5-36, whence his photo is reproduced, with thanks to his family. 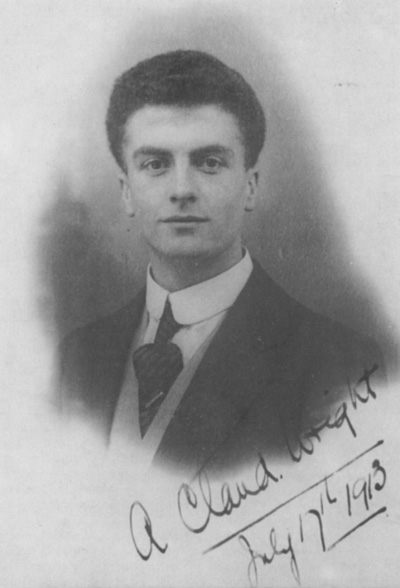