Emma Overd was born on 10 Oct 1838 at Portfield in nearby Curry Rivel parish. She was the 4th child (3rd daughter) of Charles Weaver, an agricultural labourer and his wife Elizabeth. Emma’s mother died in 1846 and the children were brought up by their paternal grandmother Rebecca Weaver. Emma could sign her name and must have had some education. Aged 22, she married William Overd, an agricultural labourer on 25 Feb 1860 at Curry Rivel church. They had 9 children, three of whom died young. In 1871 and 1881 they were living at Wick, a hamlet just outside Langport to the west. In 1891 Emma still had 2 sons at home and she was listed as a ‘willow-peeler’. By 1901 census (RG13/2289 f10 p11) Emma was living at Langport Westover in Knapps Lane next door to Susan Trott (widow, 80) and next to her was Edward Trott age 33 and Ellen Trott (née Hutchings) with their 8 children. Emma was 63 by then and the census did not give her any occupation but she was known to have continued her work as a willow stripper at the works nearby.

Knapps Lane cottages were close to the railway line (100 yards west of the River Parrett) and have now been demolished. In Fox Strangways biography of Sharp (OUP 1933 p36) the story is related that Sharp went to find Emma Overd who had ‘a great reputation as a singer’ and located her outside the pub, when she cried out: ’Lor, girls, here’s my beau come at last’. This apparently shocked the vicar who, with his daughter, was accompanying Sharp. This would not have been Marson, who was unshockable, nor indeed Rev David Ross, vicar of Langport, who only had two young sons to his name. It must have been Rev Joseph Stubbs, vicar of Huish Episcopi, recently widowed but whose adult daughter Ella, aged 24, may have been in attendance.

Emma’s 4th and youngest son William Overd (b1866) was the father of Herbert Overd (b1905), who was interviewed by David Bland in 1974. Herbert told the story that Emma Overd ‘was known to go down every Friday to draw her OAP pension at the Post Office and then call in the Railway Hotel ... if she had half a pint or a pint, she’d sing’. (David Bland Box 6 folder 3). 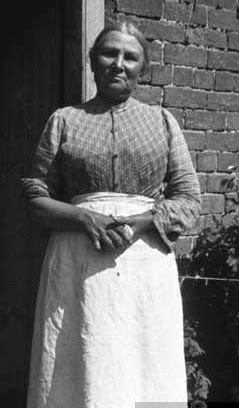