Fred was a market gardener and a bellringer. As a young man he learned many songs as he travelled around looking for work - reaping the harvest on Salisbury Plain or withy-stripping in nearby Wagg Drove. In Sharp's field notebook tunes (CJS1/9/2/1904/5 p19) Fred said that he had learned one song from a 'ballet' sold at Bridgwater Fair 'when I was about 12'. Fred died on 3/2/1933 (obituary in Langport Herald). He left £660. 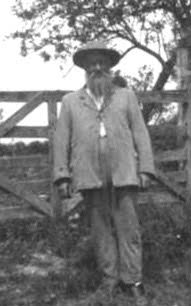