Mrs Kettlewell had arrived separately by car that evening and also wrote about the event: ’The fiddler, Cave by name, was perched up in a corner. The room was full of men who faced each other in long rows and as soon as the music struck up began to step dance. They advanced and retired and walked round, and then footed it briskly ... The landlord told me that whenever Korfie was in the neighbourhood, men would flock from far and near for a dance’. ‘Korfie’ (Coffee) was the nickname of famed local step-dancer Alfred Parfitt (see his profile). For full discussion of Henry Cave and Tom Cave, fiddlers, see Philip Heath-Coleman article in Folk Music Journal vol 10 no.2 (2012).

Henry Cave (known as Harry) was born in the Dec qr 1854 at Shepton Mallet, eldest son of Thomas Cave. He was baptised aged 3 at Evercreech church on 13/1/1858. Against both their names the vicar wrote ‘Half-gipsy’. Five further siblings were born at Evercreech and the family was settled there in both 1861 and 1871. In the latter census Henry is described as ’16, grinder & cutler’ (ref RG10/2440 f60 p21). Henry cannot be found in subsequent censuses, as it seems he was travelling round the north Somerset villages in a ‘bender’ (hooped canvas shelter) with a handcart and grindstone. It does not appear that Henry married. He died not long after his final meeting with Sharp on 28 December 1907. He had been playing at the Redan Inn, Chilcompton on Boxing Day evening and was ‘quite sober’ when he left at 11pm but was found next morning lying in a ditch nearby. The verdict was ‘heart failure, consequent on exposure’. 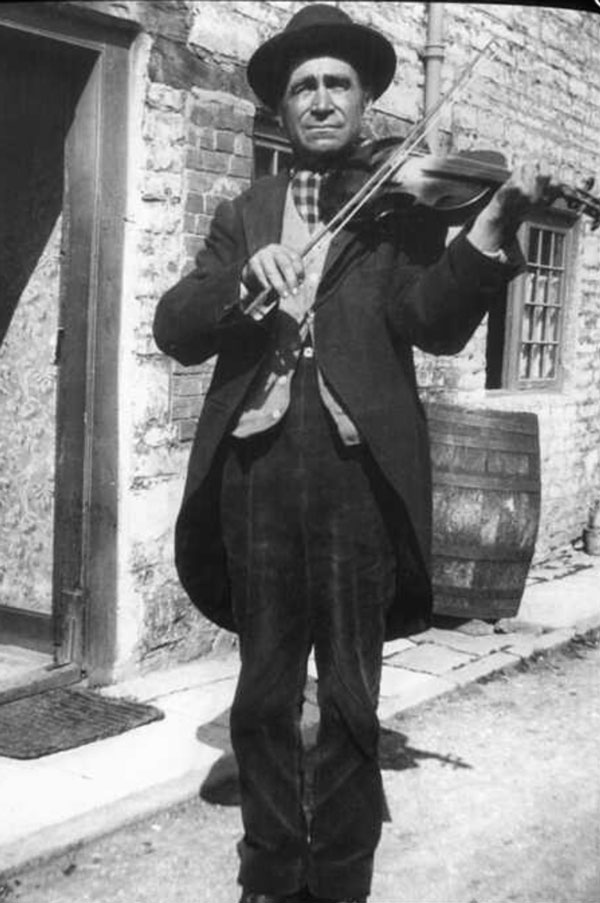