Jack Barnard aka John Barnett of Bridgwater (1863-1926): age 45, 60 songs over many visits commencing 12 Apr 1906: Jack Barnard was one of Sharp’s most prolific singers and Sharp went back to him on 16 occasions. There is some confusion because at Easter 1906 Sharp collected 25 songs over 4 days with Jack but wrote his name down as ‘John Barnett’ and in FT871 gave him the age of 45. When he revisited Jack in August the same year, however, Sharp corrected the name to ‘Jack Barnard’ and proceeded to collect a further 27 songs from him on that basis up till Aug 1909. Strangely when Sharp returned to see Jack in Jan 1916, he reverted to calling him ‘Barnett’ again for the final 8 songs in the collection. There is, however, no doubt that John Barnett and Jack Barnard are one and the same man. In Folk Songs from Somerset vol 3 Sharp selected 3 songs (shown as from ‘Barnett’ in FT872, 891 & 912) and clearly credits them to ‘Barnard’ in the book. The songs were ‘Greenland Fishery’, ‘O Sally my Dear’ and ‘Lady Maisry’. Sharp also selected ‘William Taylor’ and ‘Bedlam’ for Folk Songs from Somerset vol5.

There is another element of confusion in Jack Barnard’s tally of songs in that Sharp heard that a neighbour of Jack’s was a good singer but rather shy, so he asked Jack to intercede and persuade her to sing for him. Her name was Susan (Susie) Clarke. It seems that Jack knew some of Susan’s songs note-for-note and one song in particular ‘Arise Arise’ was recorded jointly under both their names (see FT1309 and FW1227). In FSS4, however, Sharp credits Jack Barnard with the song, so it is included in his tally of 60 songs here. Also included in his tally is the singing game ‘There stands a lady’ (FT874), which not only notes the tune but also the sequence of actions of the various performers. There is no record of these actions in either Field notebooks Words or Tunes. But in the fair copy account Sharp says the song was collected ‘at John Barnett’s’. As John (Jack) was a cripple, it’s obvious that Sharp must have observed a performance by children (perhaps Lily Porter).

In a 1931 letter to Fox Strangways (Sharp’s biographer), Rev William Warren, curate of Bridgwater, writes about Jack Barnard thus: ‘a man (about 50), a cripple from birth, who had never been to school, called J Barnard, who sang over 150 songs. He could neither read nor write, yet had a very accurate memory . . ‘

Jack’s grandfather was Robert Barnard, a cutler by trade in Wells. He moved to Bridgwater by the 1851 census and was listed as aged 70, cutler, with second wife Elizabeth, 46, and 6 children. Robert’s oldest son James Barnard (born c1831), a brickyard labourer in West Street, married Elizabeth Briffett at St Mary’s Bridgwater 12 July 1853. They had 5 sons – Robert b7/1857, James b11/1860, John b4/1863, Henry b1866 and George b1868. In 1861 census the Enumerator spelled the family surname as Barnett but in 1871 it was back to Barnard (still in West Street) and John appeared aged 8 with ‘Disabled’ in margin. By 1881 James Barnett had moved to Halswell Lane, just off West St and the four older sons were listed as brick labourers, while John was still described as ‘Crippled from birth’. In 1891 James Barnett was still at Halswell Lane but John was now a ‘Road Labourer’. In 1901 James Barnett was still at Halswell Lane but as a widower and only John with him. James was 66 a ‘scavenger’ and John was 38, unmarried, a stonebreaker ‘no use of legs from birth’ (ref RG13/2283 f65 p28). This ‘John’ must be our ‘Jack’. In 1911 he was on his own (actually listed as Walter John Barnett) age 47, single, a municipal labourer ‘cripple from birth’ at 18 Court, West St (1 room up, 1 room down). Jack was the nephew of William & John Briffett.

Judging by Sharp’s photo of him, John must have had great upper body strength to have overcome his disability and worked for most of his adult life. Like Louie Hooper in Hambridge, who had a lame leg and never attended school, John was left to his own devices a lot and perhaps saw songs as an outlet for his own delight and as a skill of memory to impress others. John enjoyed family support in that his 4 brothers all lived nearby, 3 in West Street itself, while oldest brother Robert was not far away in Union Street. All were listed in the 1901 census as Barnett, except Robert who had reverted to Barnard. John (Jack) died in Dec 1926 (ref 5c 369) aged 63. 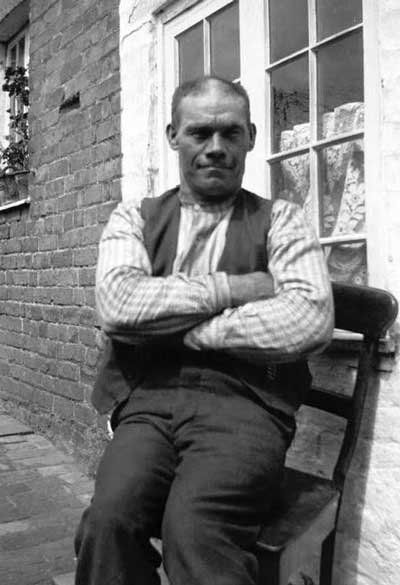