It was unusual for Sharp to find so much song material in a town, as he usually favoured village settings. A total of 192 folk songs were collected in Bridgwater Town from 38 singers* between 1904 and 1916. Bridgwater was the third most populous town in Somerset (1901 pop.15,000). The Bridgwater songs represent almost 12% of Sharp’s total Somerset song collection.

Because of its connections to Bristol’s coastal trade and (beyond that) to deep-water shipping, Bridgwater welcomed sailors with wide sea-going experience. At its peak in the 1880s the port of Bridgwater received 3,600 ships per year. Its 53 pubs and 28 beer houses absorbed many tales and songs of adventure and disaster. Of the 193 folk songs collected, 47 (24%) were songs about the sea – press gangs, sea battles, drownings as well as 11 shanties.

Bridgwater was also known for its many brick and tile workshops and Sharp met 9 of these workers. But the man who contributed most songs (49) to Sharp was John Barnett (aka Jack Barnard). John was a stonebreaker and road labourer, aged 45. He had been crippled since birth and was actually illiterate but had a fantastic memory and a repertoire of 150 songs in all. John lived in West Street and introduced Sharp to a number of singers in that district (1904-5 singers indicated by red crosses on map): 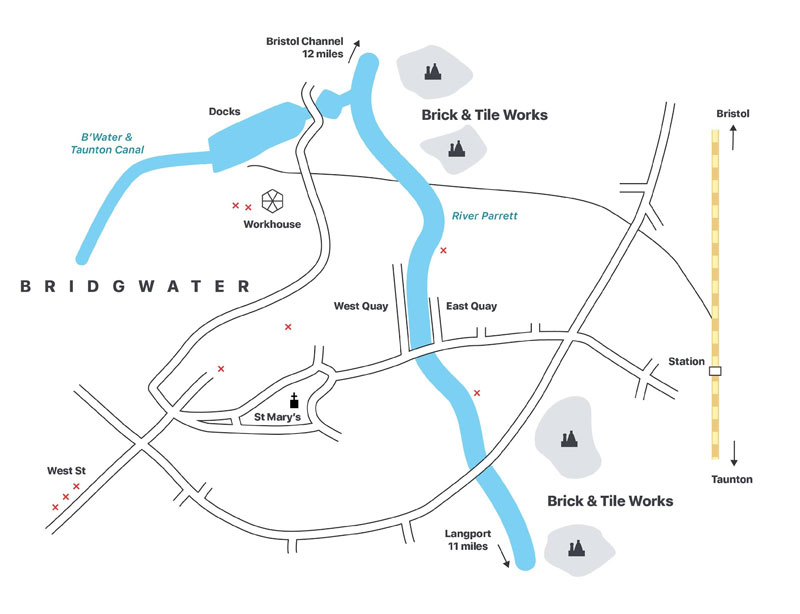