William Kimber (Junior) of Headington Quarry (1872-1961): age 27 on Boxing Day 1899: William Kimber Jr played concertina for the morris side that performed at Sandfield cottage for Mrs Dora Birch, Sharp’s mother-in-law on that cold Boxing Day morning. Kimber returned the next day and Sharp collected 5 morris tunes – Bean Setting + Laudnum Bunches (FT43); Constant Billy + Blue-eyed Stranger (FT44); and Rigs o’Marlow (FT45). He did not know how to capture the steps and figures but took the tunes and arranged them for strings and woodwind. Sharp subsequently took down more tunes and figures from Kimber – May 1906 (FT944ff), Oct 1907 (FT1510ff), Apr 1908 (FT1653ff) and Feb 1910 (FT2442ff). These were published in Morris Book vols1&2.

William Kimber Jr was born 8/9/1872 and baptised at Holy Trinity Headington Quarry on 25/1/1873. He was the eldest of 7 children (2 siblings died young), of William Kimber Snr and his wife Sophia Ann. On 27/10/1894 William, by then a bricklayer, married Florence Cripps at St Andrew’s Headington. They had 5 daughters and 2 sons. William worked for the building company Knowles of Oxford and was called upon to do work at Sandfield Cottage, which is how he got to know Mrs Birch (Sharp’s mother-in-law). She insisted that he brought his morris side to dance for her. Most of the men were quarrymen or builders and they could not work in the frozen conditions that Xmas 1899, so they decided to busk for money. For Kimber’s account see CJS1/12/11/10/34. See also Grant, Bob ‘When Punch met Merry’ Folk Music Journal (EFDSS) 1999.

In October 1905 Sharp recommended Kimber as an instructor to Mary Neal’s Esperance Girls’ Club in London. The girls had tried and enjoyed singing folksongs but took to the morris dances straightaway. William travelled to London to instruct them with his cousin Richard ‘Dobbin’ Kimber (1872-1936). The steps and figures were then formulated by Herbert MacIlwaine (Musical Director of the Esperance Club) with the considerable help of Florrie Warren, one of the dancers. This resulted in Sharp’s first Morris Book, published in April 1907.

For 400 years the quarry near Headington village in the east of the city supplied stone to build the Oxford colleges and its workforce established cottages next to the pits in the early 19th century. It became a proud and independent community, which built its own church Holy Trinity (1849) and school (1864). Kimber Jr once claimed that his great-grandfather Anthony Kimber (b1791) had been a morris dancer in the new village perhaps in the 1810s. There are certainly written reports of a morris side from the 1840s onwards, performing at May Days, at Whitsuntide and at village club feasts etc. The Headington side regularly attended the Kirtlington Lamb Ale event, when as many as 20 morris sides competed and Headington ‘always won’ (CJS2/11/1/35). The last Lamb Ale took place c1860. Kimber Jr stated that his grandfather Job Kimber (bp 21/10/1820 died 1898) danced at these Lamb Ales and took his son (William Snr) along with him.

There then seems to have been a complete break from performances between 1888 and 1899, at which point Percy Manning (1870-1917), the Oxford antiquarian, paid for a revived side to dance at the Corn Exchange as part of a lecture he gave there on 13 March 1899. This break in continuity was significant in two ways. First William Kimber Jr (b1872) would have been in his teens and early 20s, missing out on opportunities to dance. He later stated that his father William Snr not only taught him morris tunes by playing them on the fiddle to lull him to sleep as a child but also taught him all the dance steps and figures. William Jr may perhaps have done a little dancing c1887 when he was 15 but frustratingly had to wait 10 years to participate again.

The second significant consequence of this break in performances emerged in 1910 when Mary Neal, who had hitherto been full of praise for Kimber’s ‘traditional’ dancing, seized upon various discrepancies in stepping between Kimber and the older dancer Joseph Trafford. She brought Trafford and fiddler Mark Cox to the Esperance Club in October 1910. Trafford was by then 71 and had not danced for 30 years; the younger man, Mark Cox (b1860 in Horton-cum-Studley 5 miles to NE) had moved to Headington Quarry by 1881, where he married in 1885 and raised a family, working as a quarryman and bricklayer. Cox apparently got the tunes from the old stalwart Jim Hedges (1852-1909) and played 9 tunes to Clive Carey in 1910, which were then published in Esperance Morris Book 2 alongside a discrediting critique of Sharp’s dance material.

It was certainly unfortunate that the Headington tradition was thus dragged into the public spat between Sharp and Neal. There are often subtle changes in stepping and tunes over time and there can be internal jealousies among sides. Perhaps as a result of these tensions, the Headington Quarry side met only sporadically in ensuing years and had to be reformed in 1947 when William Kimber (Jr) acted as instructor once more. He died on Boxing Day 1961 and was buried at Holy Trinity church.

With its short sticks and neat stepping, the Headington Quarry tradition was eminently suitable as a prototype morris style for the Esperance Girls and the burgeoning folk dance revival. Indeed for 4 years until Mary Neal came across the Ilmington 'Maid of the Mill' dance and the Abingdon dances (e.g. Sally Luker) in autumn 1909, the Headington dances were the only style practised and promoted by the Esperance Club. Search the current Headington Quarry morris website and relevant YouTubes. 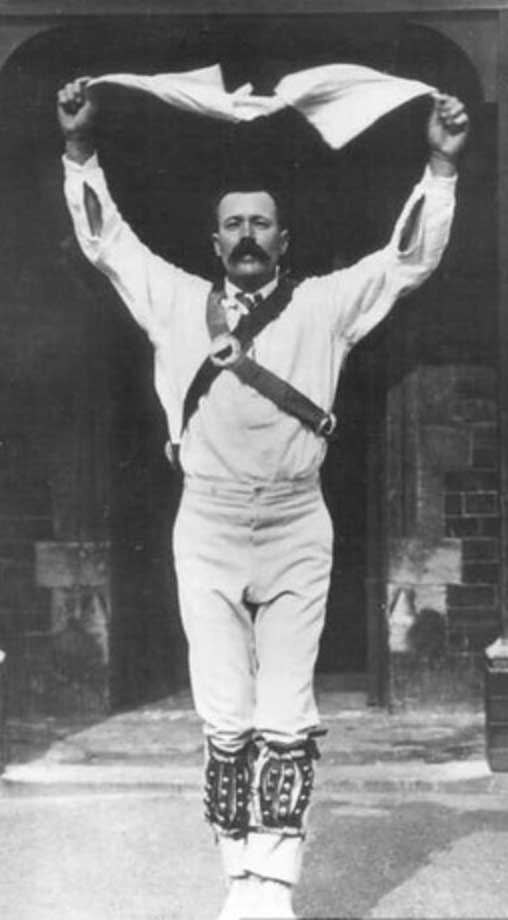