Mrs Ella Leather of Weobley (1874-1928): Mrs Ella Leather was a folksong collector in her own right and her biographical profile is well laid out in the https://www.vwml.org website (click ‘Browse Archives’). See also Andrew King’s article in the Folk Music Journal 2010. From 1904* she undertook local song collecting and collaborated with both Sharp and Vaughan Williams, recording 41 wax cylinders on a phonograph to enable the transcription of many songs and carols. She published a total of 23 songs in her important book ‘Folk-Lore of Herefordshire’ (1912).

She was born Ella Mary Smith on 26 March 1874, eldest of 7 children of James Smith and his wife Mary Ann. James Smith was a farmer of 300 acres, employing 7 men, at the hamlet of Bidney just north of Dilwyn. His father Henry (b1800) had owned the farm before him. Ella was brought up deep in the Herefordshire countryside.

In 1909 with Sharp’s support, Ella Leather ensured the collection of dance tunes and figures that have greatly assisted the development of modern ‘Border Morris’ groups (see profile of John Locke, fiddler).

*Mrs Leather joined the Folk-Song Society in April 1905 and 11 of her songs and carols were published in the Society's Journals that year. 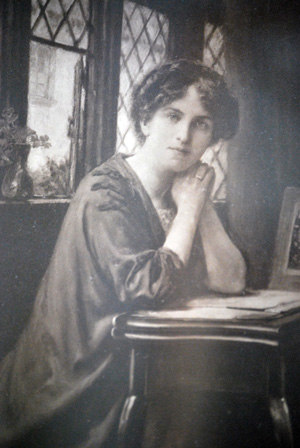