Note: Sharp spelled John’s surname with an ‘e’ and most records do actually follow that form, so that will be used here. Any departure from this spelling will be deliberate and indicate that that is what the record said: ‘John Lock’ was born on 5/9/1871 and baptised on 6/9/1872 at Hanley Child (6 miles SE of Tenbury Wells), son of Ezekiel Lock* (1830-1914) and his wife Amy. He had an older brother Isaiah James**, who was baptised on 25/3/1862 at Adbaston, Staffordshire. His other siblings need to be confirmed.

Ella Leather reported in the Journal of the Gypsy Lore Society (1924) that she first heard John and his brother (probably Isaiah) playing together at Pembridge Fair in 1908 and was able to introduce John to Sharp in 1909. She wrote: ‘Mr Sharp was delighted with his tunes and his playing, and wished he could take him to London for the folk-dances he was then reviving there. Lock visited me afterwards, introducing himself by playing under our windows until we came to listen; but lately I have not seen him, and his wife tells me he is crippled with rheumatism, and unable to play.’

John’s tunes are indeed excellent and Sharp used some of them to accompany the published versions of the Flamborough and Sleights sword dances. John Kirkpatrick and Sue Harris raided Lock’s repertoire for the dances of the Shropshire Bedlams and of Martha Rhoden’s Tuppenny Dish from the 1970s onwards. The full list of John Locke’s tunes is: ‘Mad Moll of the Cheshire Hunts’, ‘Hunting the Squirrel’, ‘Greensleeves’, ‘Sheepskins’, ‘Speed the Plough’, “Staffordshire Hornpipe’, ‘Blue-eyed Stranger’, ‘Boyne Water’, ‘Getting upstairs I never did see’, ‘Trip to the Cottage’, ‘Sheepskins‘ (version 2). John Locke was listed in the 1939 Register living in a caravan at Newhouse Farm, Leominster, an ‘agricultural labourer’. He died January qr 1947 (Leominster 9a 93).

*Ezekiel Lock was baptised 31/10/1830 at Thornbury, Glos, son of Matthew and Membrance Lock. According to the Journal of the Gypsy Lore Society (1925) ‘His (Ezekiel’s) chief occupation was fiddling; and three or four of his sons are said to play well, John, by common consent, being the finest performer among them…’ Ezekiel’s death was registered in January qr 1914 at Cleobury Mortimer, Shropshire (6a 824).

** Isaiah James Locke married Sarah Jane Clinton on 23 January 1893 and in the 1901 census at Edgton, Shropshire (RG13/2512 f31 p2) he was listed as a ‘travelling musician’ aged 36 with wife and 3 children. Isaiah James apparently had another name ‘Polin' or ‘Pollen’ and he was later found dead in the snow on the Montgomery hills – his death was registered at Atcham (October qr 1927 6a 752 aged 65). Also living with Isaiah in 1901 was his younger brother Bert, aged 24 ‘musician’. Bert was born in Diddlebury in 1877. A fourth musical son may be William Locke, who was a 'travelling musician' aged 22 in the 1911 census, encamped alongside Ezekiel and Amy Locke at Hanway Common, Richards Castle. If William was the last of Ezekiel's children, then his mother Amy would have been in her early 40s when she bore him - the 1921 census may confirm details. 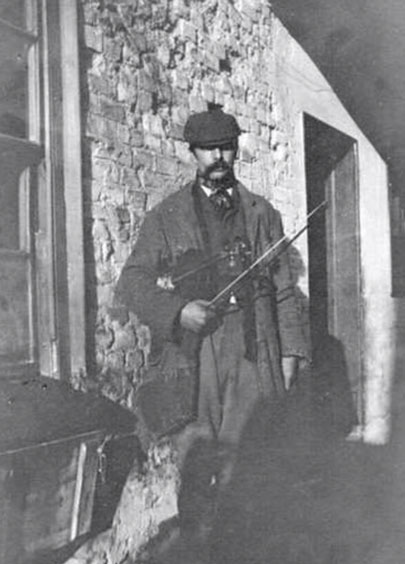