Mrs Charlotte Hector (1831-1923): age 75, 1 song ‘Banks of Green Willow’ (FT846) on 7 Apr 1906 (click vwml link above): Sharp started his April holidays in 1906 collecting some songs in the Minehead area but then returned to Hambridge to spend a few days with Rev Marson before Easter itself. He must then have cycled across the wetland moor to locate Charlotte Hector at Stathe.

Charlotte was the wife of a withy (or willow) grower and was herself a ‘withy stripper’, so her one and only song was very appropriate. Charlotte was baptised on 28/3/1831 at Stoke St Gregory church, daughter of Samuel Langdon, labourer and his wife Charlotte. She left home to go into domestic service with a local farming family, then married William Hector, a widower at Stoke St Gregory church on 23/6/1856. Neither of them could sign their name. They set up home in the hamlet of Stathe and raised 8 children, 4 of whom did not survive to adulthood.

Stathe is a very wet location, which is ideal for the cropping of willow for basket-making and other uses. William Hector was described as a withy dealer or grower in 1891 and 1901 censuses (ref RG13/2275 f48 p9). Charlotte was on her own as a widow in 1911 census. A letter in David Bland Box 4 f9 says that in her later years Charlotte was almost blind and moved to live with her daughter at Stoke St Gregory. Her grandchildren recalled that they regularly took a Sunday dinner up to Charlotte’s house and had to sit and read her a chapter of Pilgrim’s Progress before they could go. She died in 1923 aged 92. Her photo shows Charlotte with a sun cap on and withies stacked up beside her. 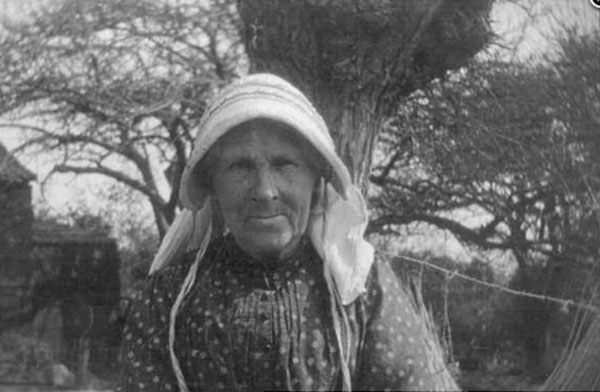