Elizabeth Lock (1839-1915): age 64, 23 songs over 8 visits commencing 8 Apr 1904:  Mr & Mrs Joseph Hunt, farmers of Muchelney introduced Sharp to Mrs Lock. It so happened that Mrs Hunt's brother, a Dr John Bryant, was a doctor at Guy's Hospital in London and had met Sharp, recommending that he visit his sister to look for songs.

Two of Mrs Lock's songs were published in Folk Songs from Somerset vol1, namely 'High Germany' (FT162) and 'Hares on the Mountains' (FT253). Click vwml link for first song. Both songs then appeared in Folk Songs for Schools (1906 Curwen):

Elizabeth Lock was born Elizabeth Hodder in Muchelney and was baptised there on 15/9/1839, daughter of Robert Hodder, shoemaker and his wife Jemima. In 1851, 1861 and 1871 censuses Elizabeth was shown as a glover. On 13/11/1879 (a spinster aged 39) she married George Locke, 40, bachelor and farmer in Muchelney church. She could not sign her name. His surname was subsequently spelled without the final 'e'.

Note: As a young woman (age 32) Elizabeth was a neighbour of George & Jane Parsons when their son (only child) Charles was born at Muchelney in 1869. Charles sang the 'Turnit hoeing' song to Sharp in August 1903 (see his profile). It’s not certain exactly when Charles moved away to live with his uncle in Drayton but it’s possible that he remembered Elizabeth’s singing and also recommended her to Sharp. 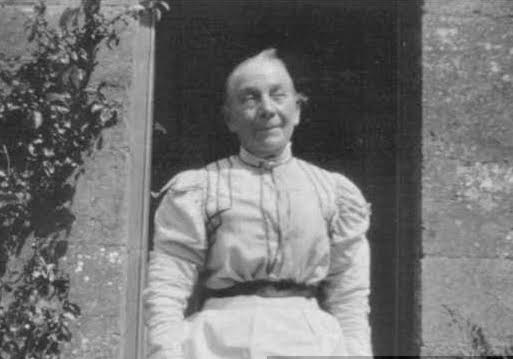