Shadrach Hayden at Bampton: Sharp initially wrote 'Haden' but all records indicate 'Hayden'. He was always known as 'Shepherd' Hayden and sang 27 songs over several visits commencing 31 August 1909. His most enduring song is ’John Barleycorn’ (FT2333) because it is very different from the other 15 versions collected by Sharp and because it is the version which was published in the Penguin Book of English Folk Songs (1959). It was then picked up by Stevie Winwood and Traffic in 1970 and became a ‘standard’. All the other versions are drinking songs with a simple refrain ‘to my right fol dol etc’. Sharp had already published versions by Robert Pope and John Stafford (Folk Songs from Somerset vols 3,4). Hayden’s version has no such refrain and tells a complete and satisfying tale.

Shadrach Hayden was born c1829* at Lyford, 8 miles E of Faringdon. Lyford used to be in Berkshire but was transferred to Oxfordshire in 1974. Shadrach was the son of John Hayden, agricultural labourer and his wife Mary.

In October qr 1849 he married Jane Neale (Faringdon reg 6 369). According to Sharp’s notes to ‘The Rambling Sailor’ (FT2289) the couple were both aged 20 at the time of the wedding. They had a son (Henry) and a daughter (Annie). Henry married and moved 40 miles away but Annie stayed much closer. Her first marriage was to Henry Wiltshire in 1874 but he died in 1880, leaving her with 3 infants. Shadrach and Jane took them all into their house at Pusey (1881 census). Annie was then remarried to George Brown in 1883 and moved away but her son Harry Wiltshire stayed on with Shadrach into adulthood, even after his marriage in 1898. By then Shadrach was living at Weald, a hamlet just outside Bampton in Oxfordshire. So, when Shadrach met Sharp in 1909, his house was full with 4 great grandchildren.

Photo is probably his great-granddaughter Ivy, aged 3. Sadly his wife Jane died in May 1910 and Shadrach himself passed away in December 1916 (buried at Bampton church, age given as 91). 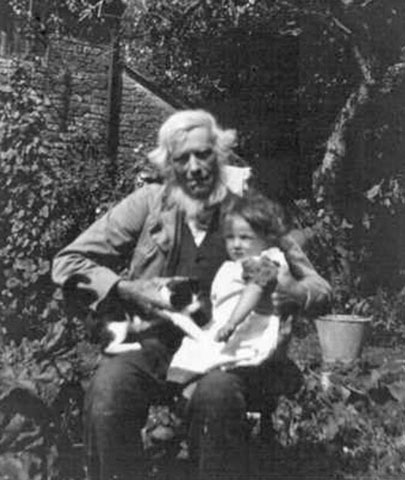