Reginald Tiddy (1880-1916): Around the time of the formation of the English Folk Dance Society in December 1911, Tiddy became a member (first reserve*) of Sharp’s demonstration morris side and then chairman of the newly established Oxford branch of the Society. He planned events with Sharp and generally encouraged the folk revival movement. Tiddy was elected a classics fellow of Trinity College Oxford in 1905 and subsequently lived for several years with his widowed father in the village of Ascott-under-Wychwood. There he brought together a new morris side to restore its old dances - Sharp had visited Ascott in Sept 1911 to interview William Pratley, aged 72: see his profile.

Tiddy moved across to teach at the new School of English at the University, where his love of Anglo-Saxon and Early English texts was engaged. He is perhaps best remembered today for his research into Mummers Plays, of which he collected at least 33 play texts. These were published in 1923 after his death. His life is well described by Michael Heaney in the Oxford Dictionary of National Biography. Only a few extra details are appropriate here:

Reginald John Elliott Tiddy was born in Margate Kent on 19/3/1880 and baptised at Hailey with Crawley church in Oxfordshire on 22/8/1880. His father William Elliott Tiddy, originally from Cornwall, was a schoolmaster who met his wife Ellen Willett, when both were working at the Wanstead Infant Orphan Asylum in Leyton, east London (1871 census RG10/1635 f162 p1). William was an assistant schoolmaster and she a governess, both aged 20.  William Tiddy was born in 1849 in Falmouth where his father was a ship's pilot, who sadly died in 1855 aged only 36. William was thus orphaned at age 6 and though his mother did soon remarry, perhaps the experience stayed with him and led him to this first job at Wanstead. At that time the Wanstead asylum was looking after 600 children between the ages of 3 and 14.

After their marriage in 1876 William and Ellen moved to Margate, Kent where Reginald was born and grew up - he had a younger brother Claude. But his mother Ellen was from Oxfordshire and Reginald used often to visit her brother William Willett, who was a farmer at Ramsden (5 miles N of Witney). Ellen's father John Willett had been initially a publican, then a farmer of 54 acres (1881). With his mother’s rustic roots and his father’s sense of altruism, it’s not surprising that once Reginald had settled at Oxford, he chose to combine Oxfordshire folklore studies with a philanthropic role at Ascott village. Coming from a modest but aspirational family, Reginald Tiddy campaigned for workers' educational rights and built a Reading Room at Ascott.

Soon after the outbreak of war he enlisted with the Oxfordshire and Buckinghamshire Light Infantry but was killed at the Somme on 10 August 1916. Tiddy's batman Ralph Honeybone (also from Ascott) wrote: 'Mr Tiddy was killed by a shell on the night of the tenth, he must have died instantly as he did not look to have suffered much when I got to him'.

Tiddy's death came 5 days after the loss of George Butterworth at Pozieres. Fellow demonstration dancers George Wilkinson and Perceval Lucas had also just been killed on July 1 and July 6. Sharp wrote to his wife Constance from America on 11 Sept 1916: 'The news of Tiddy's and George Butterworth's deaths have just fairly done for me and bowled me over. In them I have lost two of my best friends who have worked with me and loyally supported me through all the troublous times ... and I find it hard to face a world that no longer contains them. Perhaps the greatest pleasure I have had in the last 10 years has been the intimacy and close association with men of the younger generation who I felt were to carry on the work I had started and I had around me some, like these two, who were really brilliant minds. They were men who counted. And now except for Vaughan Williams, there is no one left.' 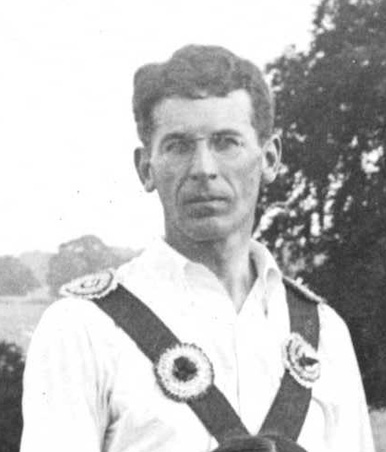