William Wells was born on 4/1/1868 and was baptised ‘William Nathan Wells’ on 23/2/1868 at Bampton church, son of Sarah Ann Wells, ‘spinster’. Actually her maiden name was Taylor. There was no father’s name in the baptismal register. He had a younger brother John Edward Wells, who was baptised at Bampton on 9/4/1871, son of ‘Annie Taylor’ - again no father’s name. In the 1871 census at Weald (a hamlet just outside Bampton) William was aged 3, in the house of his grandmother, Hannah (Maria) Wells, age 55, needlewoman. His mother was listed as Annie Wells, unmarried aged 21 and his baby brother John was there too, aged 3 months. Both boys were actually listed then with the surname of Taylor.

The full story is that Hannah Maria (née Radband, bp Jly 1814, daughter of Thomas Radband, a dancer 1776-1854) married Charles Taylor in 1838 but he died in 1849, leaving her with 5 children to support, the youngest being (Sarah) Ann Taylor (baptised 2/9/1849). Hannah then was remarried to George Wells, labourer, on 27/9/1852 and they had one son George born that same year. (Sarah) Ann Taylor probably went into domestic service as a young girl but then returned to her mother with her 2 infant boys by 1871. In the 1881 Bampton census William, 13, had switched his surname back to ‘Wells’ (as did his brother John). They were still being cared for by grandmother Hannah and her husband George Wells.

Their mother meanwhile, still calling herself ‘Annie Wells’, was listed in the 1881 census as a ‘visitor’, occupation ‘housemaid’ in Marylebone, London in the house of Joseph Turner, 37 a plumber, and his wife Mary Ann, aged 39 (ref RG11/208 f31 p24). Mary Ann Turner was in fact a Bampton friend from the past – she was baptised 25/12/1841, daughter of Charles and Ann Tanner. It is not known what happened to Annie – whether she stayed longer in London or married. Her younger son John did in fact marry and settle in London, so perhaps Annie did stay there.

In 1953 William Wells looked back at his life (see Journal of the English Folk Dance and Song Society vol8, no.1 1956 pp1-15) and told how he went to the village school with his brother John (called Jack). He then became a butcher’s boy at 14 and an under-gardener at Bampton Manor. He had a spell in London, perhaps with his mother Annie but returned to Bampton in 1887. He just got on with his life, marrying Ellen Mary Shewey on 13/10/1892. They had 3 children – 2 sons (Francis and Robert) and a daughter Ellen. William wrote: ‘I’ve been working on all sorts of work. I’ve been fagging, mowing, worked on the farms, thrashing – all sorts of work. I’ve walked six mile to work and six mile back at night for two bob – two bob a day.’

It was in 1887 that he took on the role of Fool in the morris side, aged 19 and proved himself a confident dancer too. He had 3 uncles* who were all dancers – Henry Radband (1836-1915), Alfred Taylor (1840-1909) and George Wells Jr (1852-1919). William took over as fiddler c1899 and would play for the side until 1925, which included performances with the Esperance Girls’ Club as well as at the Globe Theatre and the Albert Hall. He was coaxed into giving some further performances and recordings, notably for the American collector James Madison Carpenter in 1933, several times for the BBC and others. But his eyesight and his hearing both failed him towards the end. For a full account of the Bampton morris history and of Wells’ legacy, see http://www.mustrad.org.uk/articles/bampton.htm> by Keith Chandler (1992).

• Despite their different surnames, they were all sons of William’s grandmother Hannah Maria.

Note: Wells described how he played ‘Bacca Pipes’ (FT2262 & 2355) for 2 dancers to demonstrate the dance to Sharp and Herbert MacIlwaine, as the latter accompanied Sharp on this trip. The two men grappled with the tune and the stepping of the Bacca Pipes jig and required several demonstrations to ‘get it’. This was in preparation for Morris Book vol3 (1911), which was the last time MacIlwaine contributed his skills to Sharp.

In summary William Wells never had a father but spoke proudly of his (step)grandfather George Wells, who at one time led the Bampton morris side. George Wells (b1822) died in 1885 (when William was only 17) but his grandmother Hannah lived on till 1899, aged 86. William Wells is best remembered for his strong rhythmic playing and for his great enthusiasm to keep the Bampton morris going. He died aged 85 in October qr 1953 (Witney 6b 890). Douglas Kennedy described him as ‘one of Nature’s greatest gentlemen’.

Check out any of the 3 current Bampton morris sides + YouTubes. Or just visit Bampton on a Spring Bank Holiday! 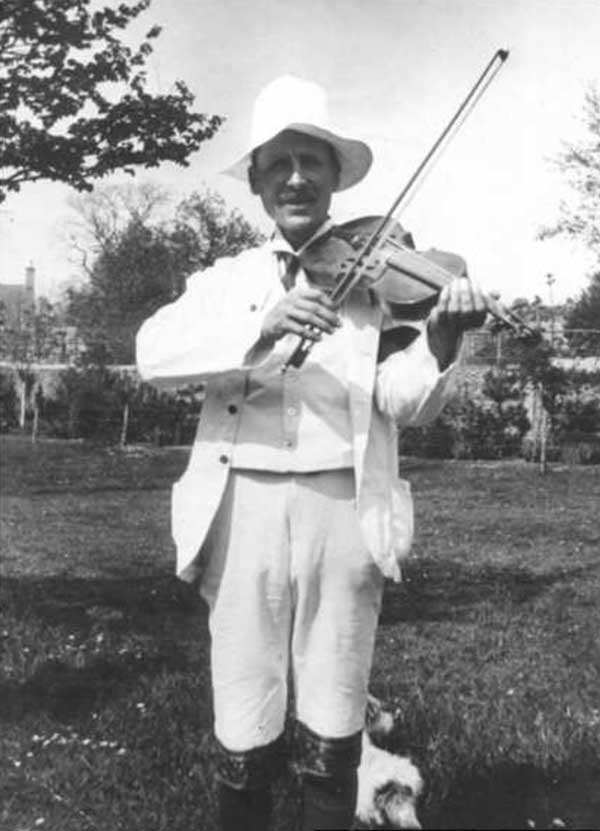