Richard Withers at Great Rollright: age 103, 1 song ‘Young Man from the Country’ (FT2228) on 30 July 1909: Sharp noted that he had taken down this song (Roud 1510) ‘as a curiosity’ and in all his travels he actually obtained the song from nobody else. Alan Lomax recorded a version from Cyril Poacher at Blaxhall, Suffolk in 1953.

The song champions the country lad who goes to the town and does not fall for the tricks and shams of the people he meets there. The punchline is ‘I’m a young man from the country and you can’t get over me’. It appeared on broadsides in the mid-19th century – a relatively modern song from such an aged singer. At Richard’s burial in 1910 he was recorded as ‘Richard Widdows (generally known as Richard Withers)’. In all censuses he stated that his place of birth was Burmington, which is 2 miles S of Shipston-on-Stour.

In his notes Sharp said that Richard would be 104 on Oct 11th 1909 (i.e a birth date of 1805). Unfortunately there was no infant baptised either ‘Widdows’ or ‘Withers’ at Burmington church between 1800 and 1812. There was, however, a ‘Richard Widows’ baptised at nearby Brailes church on 25/5/1811, son of John & Elizabeth Widows. Perhaps this is ‘our man’ and he was baptised as a child. Certainly at his burial Richard was recorded as ‘104’ and we should not doubt his veracity at this point. A ‘Richard Widdows’ was married in Feb 1835 to Eliza Penn at Stretton-on-Fosse church (2 miles W of Burmington). The Banns register unfortunately does not give his age nor parentage but further research may uncover these details.

In the 1841 census for Great Rollright (10 miles S of Stretton) we find Richard Widows 25, agricultural labourer, with wife Eliza, 25, and 3 children Ann 5, Elizabeth 4 and John 1. All three children were baptised at Great Rollright. Ages were rounded up or down in the 1841 census, so we should not be overly concerned about any birthdate for Richard at this point. In 1851 at Great Rollright Richard Withers was a widower aged 39 with children Ann 15, John 13, Elizabeth 11, Mary 8 and Joseph 4. It looks like the same family. Eliza had died 18/3/1849 aged 34. Richard was remarried to Jane Wiggins, spinster, at Great Rollright church on 8/10/1854. They had 6 children and remained in Great Rollright for the rest of their lives. He was listed as either a ‘shepherd’ or an ‘agricultural labourer’ in all censuses. He seems to have worked mostly at Coombs Farm in the village. He never seems to have ventured into any towns for work, which makes his choice of song somewhat surprising. He was buried at Great Rollright church on 3/2/1910. Sharp's photo includes Jane Withers. 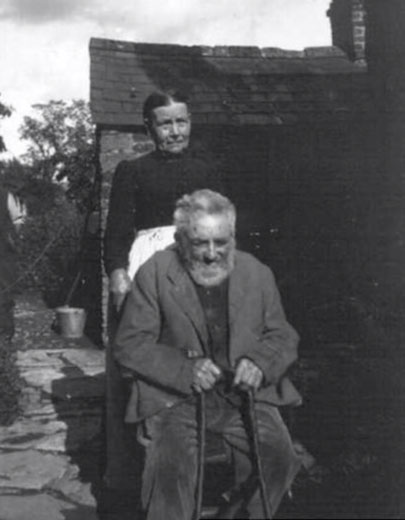